Nike ‘Waffle Shoe’ becomes the most expensive sneakers ever auctioned 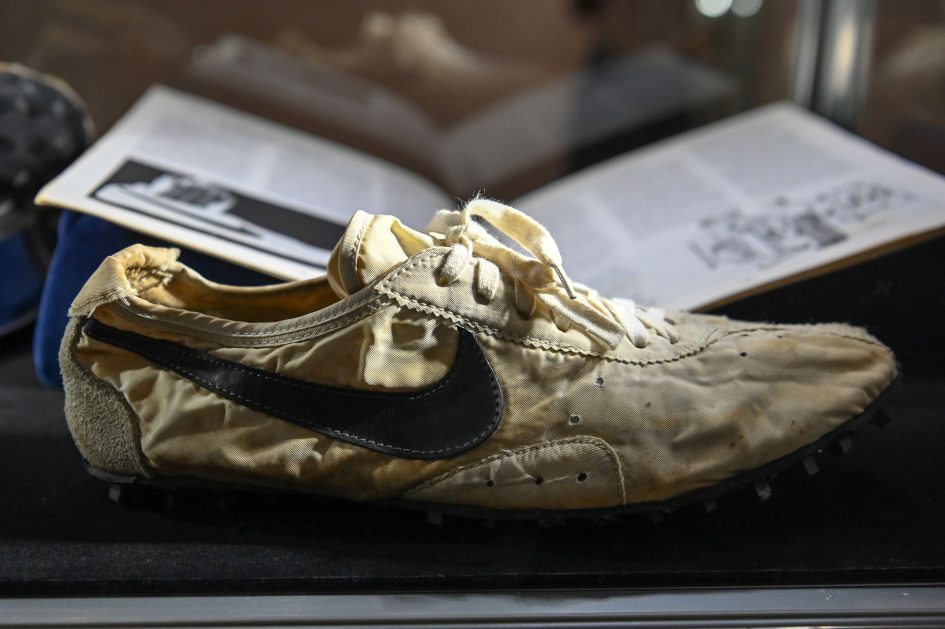 A pair of 1972 Nike running shoes became the most expensive sneakers ever sold at auction, fetching $475,500 at Sotheby’s.

The sneakers were purchased by Canadian entrepreneur Miles Nadal, and were part of a collection of 100 of the rarest sneakers ever made that was being sold by Sotheby’s and sneaker marketplace Stadium Goods.

While aged and brown, the 1972 Nike Waffle Racing Flat “Moon Shoe” is almost a mythical part of sneaker history. The shoes were made by Nike co-founder Bill Bowerman, who used his wife’s waffle iron to create a new kind of running shoe with a waffle-patterned sole to help runners improve speed. Nike made 12 of the shoes for runners in the 1972 Olympic trials, and the design went on to help Nike become a global sneaker powerhouse. The pair being sold was the only one that had never been worn.

Nadal purchased the other 99 pairs of sneakers in the Sotheby’s sale last week for $850,000. While Nadal had offered to buy the Waffle Shoes along with the rest of the collection, the seller preferred to sell them at the online auction to fetch a higher price. They were expected to sell for between $110,000 to $160,000, but they shattered the estimate and the all-time record for a pair of sneakers at auction.

Nadal told CNBC that he plans to display the waffle shoes, along with the other rare Air Jordans and Adidas sneakers in the sale, at his private auto museum in Toronto.

Nadal said he had never collected sneakers in the past and rarely even wore them, tending more toward suits and dress shoes. But when learned about the fast-growing world of sneakerheads and collecting, and the rise of streetwear in the collecting world, he realized sneakers were a true art form worth collecting, he said.

“I’ve always been an appreciator of iconic collectibles — cars, watches, art, books, antiquities,” he said. “And so I thought this would be a really cool thing to have.”

Nadal said he originally planned to buy only six pairs, but when Sotheby’s said he could buy the entire collection of 100, “I went ‘That seems like a good thing to to.’ It wasn’t more complicated.”

Previously, the most expensive sneakers ever sold at auction were the pair of Converse sneakers that Michael Jordan wore in the 1984 Olympic gold-medal game against Spain. They sold in 2017 for $190,000.

(Correction:  Canadian entrepreneur Miles Nadal paid $1,287,500 for the 100 pairs of sneakers in the sale. A previous version of this story misstated the total.)