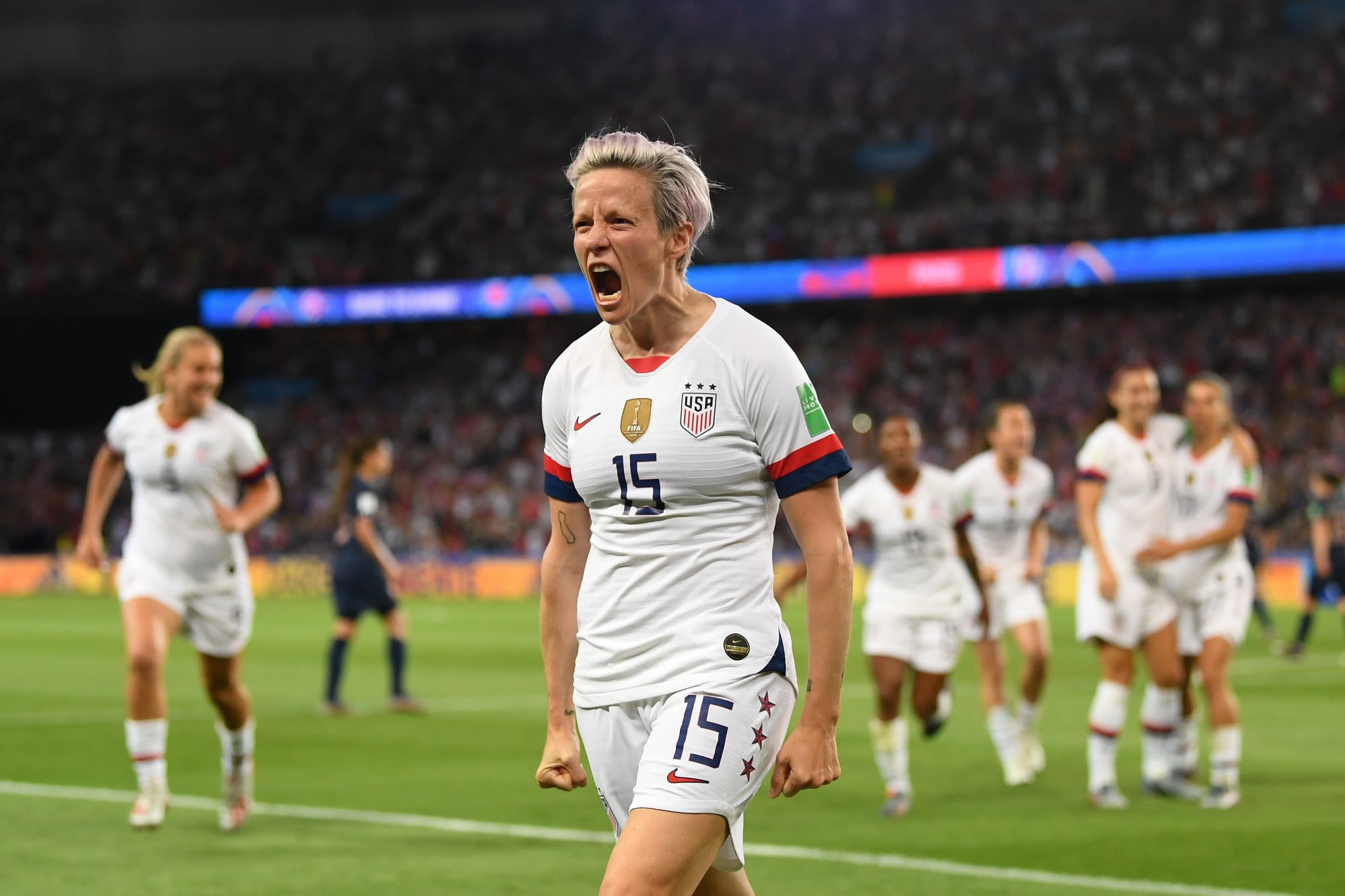 Megan Rapinoe #15 of the United States celebrates scoring during the 2019 FIFA Women’s World Cup France quarter-final match between France and the United States at Parc des Princes on June 28, 2019 in Paris, France.

With the U.S. women’s national soccer team defeating the Netherlands 2-0 Sunday to take the 2019 Women’s World Cup, Nike is also winning, with jerseys selling out on its website and buzz around its latest ad campaign taking over the internet.

The brand sponsored 14 of the two dozen teams playing in the tournament this year, including three that made it to the final four and one of those being team USA. Professional soccer players make up Nike’s second-largest group of sponsored female athletes, behind track and field.

By Monday morning, a special version dropped by Nike Sunday evening of the women’s jersey with four stars — with each star representing a World Cup win for the women’s team: once in 1991, 1999, 2015 and this year — had already sold out in many sizes for women, men and kids, a spokeswoman confirmed to CNBC.

Nike’s U.S. 2019 Stadium Home jersey for women is already sold out in most sizes, according to its website.

CEO Mark Parker had told analysts last month that the USA women’s home jersey, in the midst of the tournament, had already become the top-selling soccer jersey, for both men and women, ever sold on Nike’s website in one season.

“To start the tournament nearly two-thirds of the teams wore Nike kits and half the players wore our boots,” Parker told analysts in late June. “The exposure is driving outstanding sell-through in kits, high performance bras and lifestyle extensions.”

Nike could use the boost from the World Cup win as it’s been trying to sell more to women overall but has faced some backlash for its treatment of its female employees and sponsored athletes.

More recently, it was an op-ed with the New York Times that Olympic athlete Allyson Felix wrote, saying Nike wanted to pay her 70% less for her contract after she had a child. Nike responded shortly after by saying it was putting an end to financial penalties for pregnant athletes. And the uproar seems to not have put a dent on sales, which jumped 4% in the latest quarter to just over $10 billion.

Meanwhile, as sales of Nike’s new World Cup merchandise are skyrocketing — with many items being bought and worn by men — it has provided more fuel for the ongoing debate around the fact that female soccer players are still being paid less than men. But women’s games are now generating more revenue than men’s games.

After the win on Sunday, Nike aired a new ad for the women’s soccer team, hinting at some of these frustrations.

In it, a women says: “I believe that we will make our voices heard and TV shows will be talking about us every single day and not just once every four years. … And that women will conquer more than just the soccer field, like breaking every single glass ceiling and having their faces carved on Mount Rushmore. … And that we will keep fighting not just to make history, but to change it forever.”

“The Nike brand is about winning and it’s gender-neutral in this way,” said Erich Joachimsthaler, CEO and founder of branding agency Vivaldi.

“The new ad … when they talk about women and the win [Sunday], they’re not talking about it in some beautified way. Some pink way,” Joachimsthaler said. “They’re talking about it like it’s serious. Like you deserve it. You, women, are the best.”

Nike, which pulls in less than a quarter of its sales from women today, says the momentum from the World Cup gives it a nice boost and sets the stage for its initiatives for the remainder of the year, like its upcoming launch of geography-specific clothing for women in Asia, based on studies it did around female body types and sizing.

“We can feel the World Cup’s energy and impact throughout our growing women’s business,” Rosemary St. Clair, the head of Nike’s women’s division, said. “We’re ecstatic about how this summer has contributed to the acceleration of our women’s offense at Nike.”

Nike shares were up less than 1% Monday morning. The stock has rallied more than 17% this year, bringing Nike’s market cap to roughly $138 billion.