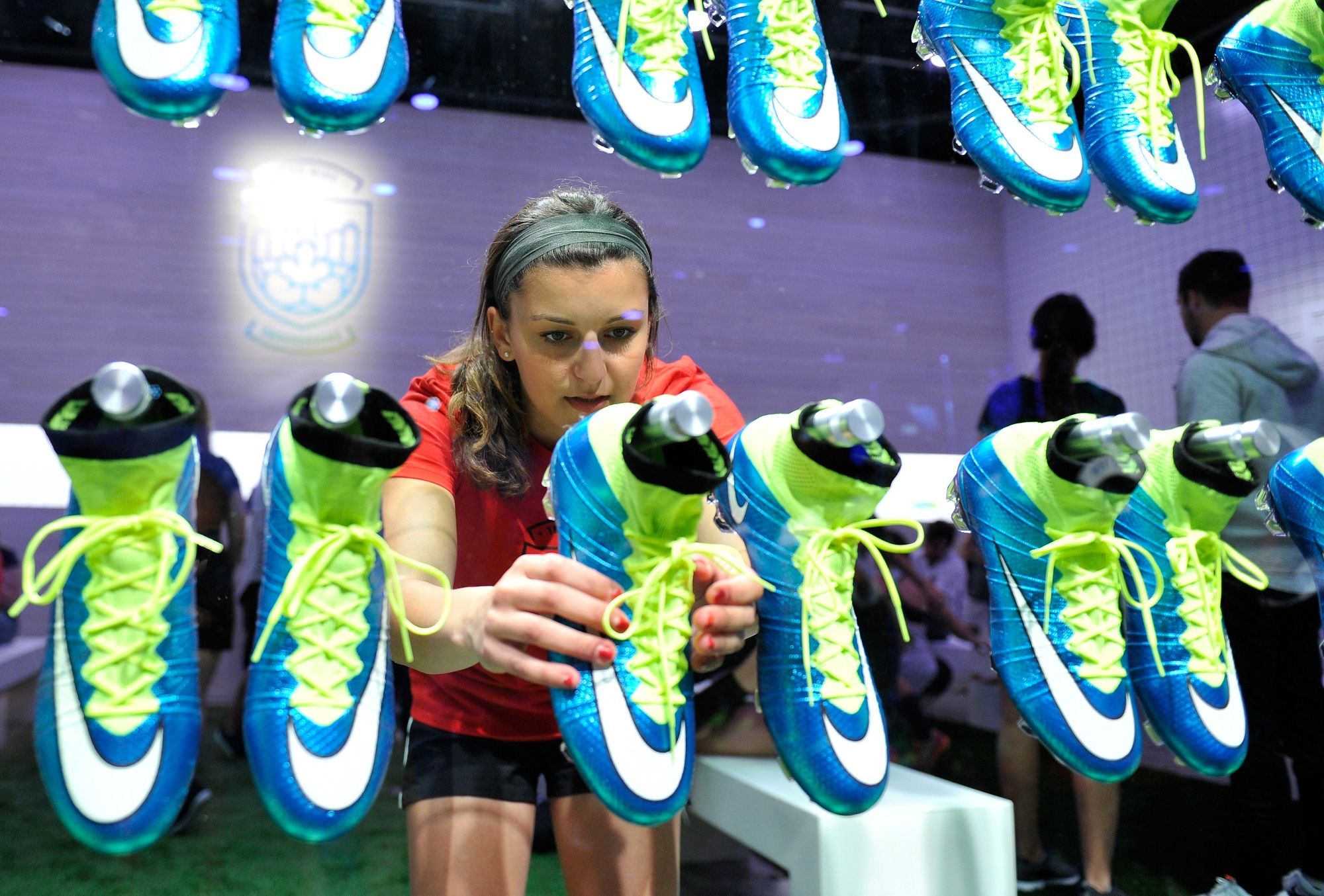 When Olympic athlete Alysia Montano took part in a race only one month away from having a baby, she became known as “the pregnant runner.” It was 2014 and she went on to win a national championship when her daughter was six months old, and another when she was 10 months old.

But in an opinion piece and video published by the New York Times on Sunday, Montano said when she told one of her former sponsors, Nike, that she wanted to have a baby during her career, the sports giant told her it would pause her contract and stop paying her.

This, she said, is at odds with commercials such as “Dream Crazier,” released by Nike in February, where Nike-sponsored tennis player Serena Williams is praised for “having a baby and then coming back for more,” and in which viewers are told: “Show them what crazy can do.”

Pregnant athlete Alysia Montano at the USA Field and Track Championship on June 26, 2014 in Sacramento, California

Nike has admitted that “a few” female athletes did previously have “performance-based reductions” in their fees, but last year it standardized its approach across all sports “so that no female athlete is penalized financially for pregnancy,” according to a statement emailed to CNBC. It said it is common industry practice for agreements to include performance-based payment reductions, but did not confirm to the Times if its change in approach is a contractual guarantee.

Montano’s article has prompted much debate. Women’s rights campaigning organization Time’s Up tweeted that Nike “should be supporting safe and healthy pregnancies — not pushing people out or slashing benefits.”

Running coach Mario Fraioli called the lack of maternity benefits for women athletes “one of athletics’ dirtiest secrets,” in a tweet.

Meanwhile, Kelly Williams, managing director of consultancy Sports Revolution, believes that because most athletes are self-employed, paid maternity leave is not warranted. “I think there is more of a debate about keeping a ranking than getting paid. I think the movement in women’s sport and focus on equality is absolutely great. But would we give a male athlete maternity leave? … (Women) don’t want to be different, just treated the same (and) we should not notice the difference between athletes,” she said in an email to CNBC.

“I own my own business and if I don’t work, I don’t get paid. I have to budget for babies and I have had three,” she added.

The controversy also raises the question of whether brands should take a stand on social issues, as Nike has done in its advertising, or have their executives publicize opinions.

“Consumers increasingly expect brands to have a voice in political and social conversations, and gender equality is among the top issues Americans want to see companies support,” according to Jeremy Robinson-Leon, president of New York based PR firm Group Gordon, in an email to CNBC. “However, the public won’t stand for lip service. When a company’s words and actions don’t add up, its reputation will inevitably take a hit.”

Nike is not afraid of controversy: Shares in the company fell in September 2018 after it released an ad starring activist Colin Kaepernick. For Simeon Siegel, an analyst at Nomura Instinet, its willingness to make a stand has not dented long-term sales. “Nike has a long history of … controversy for good and bad … and that long history sits side by side with a long history of becoming the largest … apparel (and) footwear brand in the history of time,” he told CNBC by phone.

For Robinson-Leon, any company that pushes gender equality in its advertising but behaves differently in private risks its reputation.

“Clearly, a brand like Nike that bills itself as a leader on social issues hurts its credibility by saying one thing publicly and doing another backstage. It’s illogical for the business and a disservice to the intended social impact. And, more broadly, it gives rise to an understandable cynicism on the part of the public that undermines the positive efforts of other responsible businesses,” Robinson-Leon said in an email to CNBC.

Other companies have been tripped up by how their public behavior contrasts with their advertising — United Airlines’ “Fly the friendly skies” was mocked on social media after a man was forcibly removed from a flight in 2017. But almost a year later, parent company United Continental Holdings posted its fifth consecutive year of profits.

“Dream Crazier,” from February, and “Dream with Us,” released on Mother’s Day to promote Nike’s sponsorship of teams playing in the 2019 FIFA Women’s World Cup, are part of the company’s strategy to grow its U.S. business by focusing on women.

The debate over maternity pay is not likely to dent sales to women, according to Siegel. “The reality is Nike(‘s)… marketing and their messaging is also inclusive … I believe that as long as they are not putting their head in the sand we are unlikely to see a sales miss,” he told CNBC by phone.

Siegel added that Nike has been fast to deal with problems as it became aware of them. A year ago, the company saw an exodus of executives amid accusations of harassment and discrimination, and an apology from CEO Mark Parker who said the company would change its culture.

“Nike, generally speaking, over the past year has actually sought to get ahead of issues presumably as they became aware of them,” Siegel said. “Rather than being called into question and then fixing the business, Nike during the worst of it aired their own dirty laundry. It’s always fair to challenge why there was dirty laundry in the first place, but on a relative scale the fact that the company has moved fast to at least try to make change and correct is worthy of note,” he told CNBC by phone.

“From an investing perspective right now, the company continues to grow healthfully which means from a consumer perspective people are still buying their products en masse.”

A soccer fan grabs a shoe at The Nike Underground, a pop-up experience in downtown Vancouver.