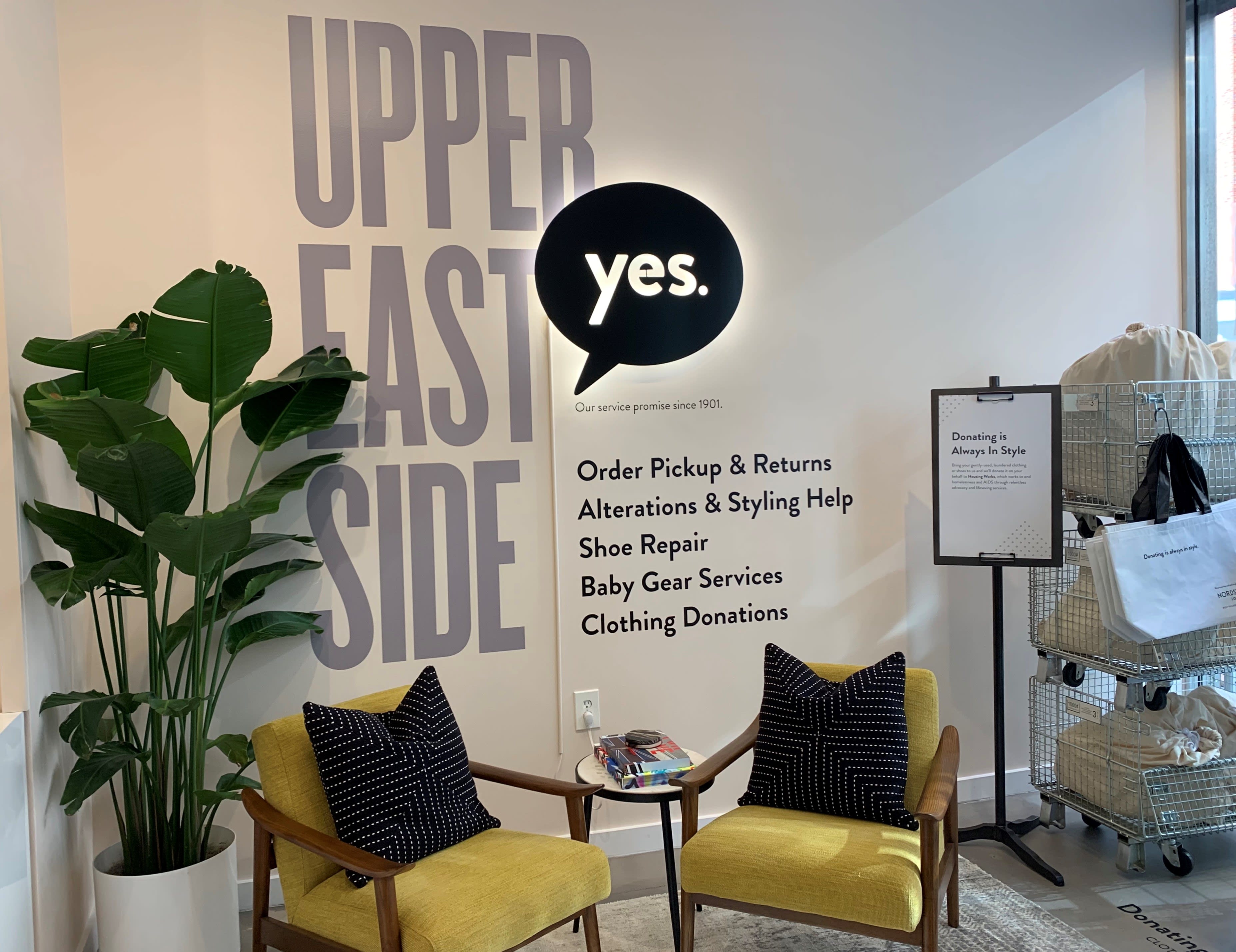 Nordstrom Local opens on the Upper East Side in New York on Thursday. A second location is set to open in the West Village on Sept. 27.

On Thursday morning, one of the stores opened up in Manhattan on the Upper East Side, at 1273 3rd Ave. Later this month, on Sept. 27, a Nordstrom Local will open in the West Village neighborhood, at 13 7th Ave.

This builds on Nordstrom’s existing portfolio of three Local shops in California — on Melrose Avenue in Los Angeles, in Downtown Los Angeles and in the Brentwood neighborhood of LA — that offer personal styling services and alterations, and serve as a hub for buying online and picking up in person. The catch is, there’s no inventory for sale there. Instead, shoppers can pick out their favorite looks online before they visit the space, to have the merchandise there waiting for them to try on, and purchase if they’d like.

“It’s not about a single store,” co-President Erik Nordstrom said in an interview at the Nordstrom Local on the Upper East Side on Thursday morning. “Engagement with customers is a great thing. To be able to serve customers on their own terms. … We’re trying and seeing what resonates with customers [here].”

Nordstrom has said before that New York is its biggest market for online sales. Up until it opened a men’s flagship store near Columbus Circle last year, though, it only had two locations for its off-price business, Nordstrom Rack, in the city.

Customers can visit the Nordstrom Local on the Upper East Side for gift wrapping and stroller cleaning, in addition to other services.

“Historically, retailers viewed their assets … in [terms of] sales per square foot,” Erik Nordstrom said. “It’s less about that. And that’s what we talk about internally — is don’t get caught up,” in where people are shopping, be it in stores or online, he said.

Part of the hope for Nordstrom, in rolling out more Local locations, is to amass more frequent visitors. It will lure people in with additional services like shoe and handbag repairs, and gift-wrapping available at the two new Nordstrom Locals in New York. The company said the roughly 1,800-square-foot space on the Upper East Side will also offer stroller cleanings for busy moms. And the roughly 2,200-square-foot space in the West Village will have a section dedicated to showcasing products from popular brands, on a rotating basis.

The growth comes as Nordstrom has hit a sales slump and needs some sort of boost. In its latest earnings report, it said sales at full-price stores were down 6.5%, while sales in the off-price channel dropped 1.9%. The Seattle-headquartered company proceeded to slash its outlook for the fiscal year, blaming the poor results on “executional misses.”

During a call with analysts, co-President Peter Nordstrom said the cycle for women’s apparel is “shorter than it’s ever been. … So one of the things we need to do is identify new emerging brands and amplify them quickly.”

The Nordstrom Local on the Upper East Side in Manhattan includes a space for food and beverages for customers in the back.

Nordstrom, like other department store chains in 2019, faces added pressure as more brands invest in their own stores and websites, as opposed to relying heavily on wholesale partners. More and more women are also turning to subscription boxes and rental or styling platforms like Stitch Fix and Rent the Runway for clothing. Nordstrom has tried to tap into that trend by putting Rent the Runway drop boxes in some of its Local stores.

A bigger bet in New York

Nordstrom on Oct. 24 will be making an even bigger mark in New York, opening up its first full-size department store for women in the city. It opened a shop for men right across the street in 2018.

When it opens in late October, the flagship space will hold six restaurants, including some run by famed Seattle chefs. It will compete with the likes of the new Neiman Marcus department store at the Hudson Yards mall, Macy’s at Herald Square, Saks Fifth Avenue and Barney’s New York on Fifth Avenue.

Nordstrom, however, expects its new store — which marks the largest single-project investment in the company’s history — will be unique enough to set it apart from the rest.

“New York doesn’t need just another store,” Erik Nordstrom said. “It’s a different breath of offering we have … [thinking about] how the modern customer shops today.”

Nordstrom shares were up about 7% on Thursday morning, having fallen more than 50% from a year ago. The retailer’s market cap is roughly $4.9 billion.

Millennials are drinking more because of kids
Kroger unveils plans for a line of plant-based products, including sausage and deli slices
To Top
error: Content is protected !!
Top