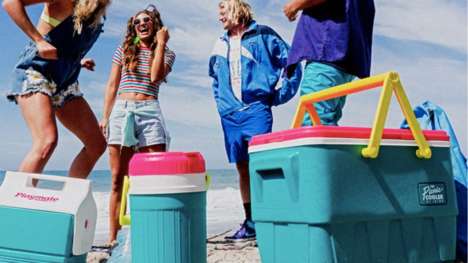 With the 90s revival still in full force, Igloo has announced that it is relaunching its iconic Picnic Basket Cooler. With this neon beverage carrier by your side, you can party just like its 1991.

While Igloo’s original Picnic Basket Cooler was discontinued back in 1995, now the hit beach accessory is back. Sold exclusively at Urban Outfitters and on the Igloo website, the new cooler looks just like the 90s original. The nostalgia-inducing collection includes the classic 25-quart picnic cooler, along with a smaller, 4-quart Playmate Mini that holds up to six cans. There is also a half gallon water jug with a “free-pouring flip-top spout” and carrying handle.

But best of all, all the coolers boast a neon color scheme that looks straight out of an episode of ‘Beverly Hills 90210.’ As Igloo’s VP of Marketing explains, “When we decided to re-release the Picnic Cooler we thought the only way to do it was to stay true to our roots and relaunch with the same colors, on the same machines, and in the same factory in Katy, Texas.”