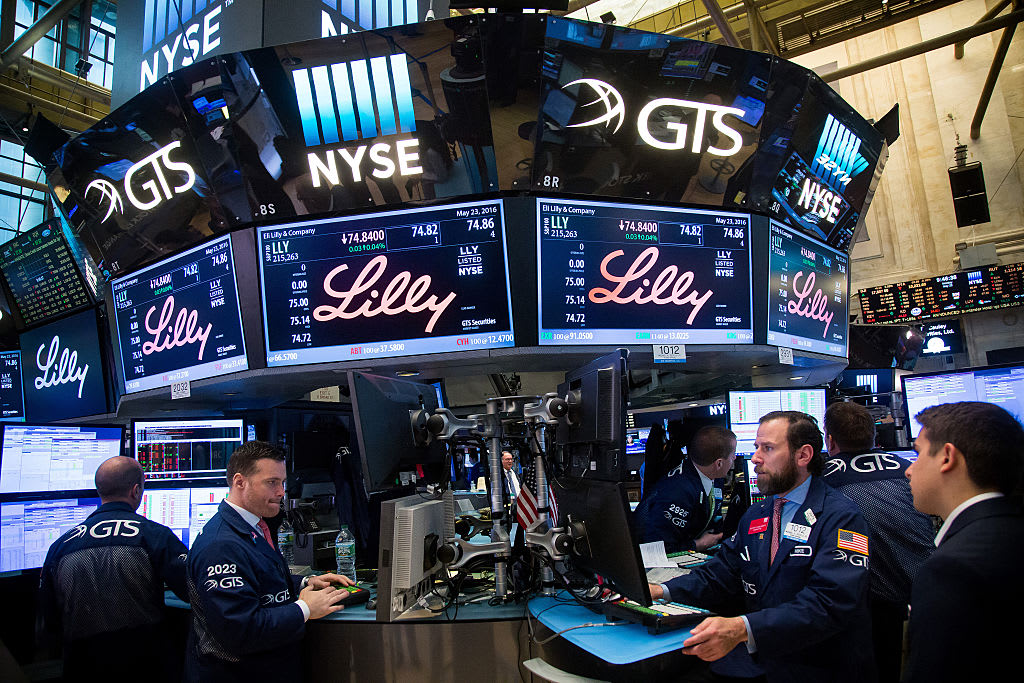 Traders work beneath monitors displaying Eli Lilly signage on the floor of the New York Stock Exchange.Michael Nagle | Bloomberg | Getty ImagesPharmaceutical stocks fell Tuesday after an early draft of House Speaker Nancy Pelosi’s long-anticipated plan to reduce U.S. drug prices surfaced on Capitol Hill.The main thrust of the plan, which is still in flux, would allow Medicare to negotiate lower prices on the 250 most expensive drugs and apply those discounts to private health plans across the U.S., according to a copy of the document  reported by Bloomberg Government. A senior Democratic aide verified the authenticity of the document but cautioned that it wasn’t the most current version and was subject to change. Shares of drugmakers fell on the news. Eli Lilly was down by about 1% in afternoon trading. Merck and GlaxoSmithKline both fell by more than 2%. Evercore ISI analyst Umer Raffat told clients Tuesday that the proposal showed “some extremely ambitious proposals,” including price negotiations.The Department of Health and Human Services is currently prohibited from negotiating drug prices on behalf of Medicare — the federal government’s health insurance plan for the elderly. Private insurers use pharmacy benefit managers to negotiate drug rebates from pharmaceutical manufacturers in exchange for better coverage.Pelosi has been working for months on a plan that would give HHS that power. House Democratic leaders went on a “listening tour” around the party earlier this year to discuss details of Pelosi’s plan, but haven’t yet distributed it across the caucus, a Democratic aide said in an interview. The legislation is expected to be unveiled as soon as this month.Pelosi spokesman Henry Connelly declined to comment on the draft. She continues “to engage members across the caucus as the committees of jurisdiction work to develop the boldest, toughest possible bill to lower prescription drug prices for all Americans,” he said in an email.High prescription drug costs have become a rare bipartisan issue, with lawmakers on both sides of the aisle demanding changes. Democrats are jockeying to prove they can lead reform. President Donald Trump has made lowering prices one of the key issues of his administration, as health care remains a top issue for voters in the 2020 elections.Americans are increasingly in favor of more federal regulation to bring down high prescription drug prices, including letting the government negotiate directly with drugmakers, according to a survey from the Kaiser Family Foundation. While House Democrats have proposed letting the government negotiate with drugmakers directly, opposition is strong among Republicans who say they want prices negotiated in a free market.Another plan from the Senate Finance Committee and backed by Trump would also make changes to Medicare and include a penalty for pharmaceutical companies that raise drug prices faster than inflation. The plan, which a Republican aide told CNBC that lawmakers see as a “middle ground” approach to drug prices, also received pushback from Republicans who argued the penalty rule was an excessive government intervention.