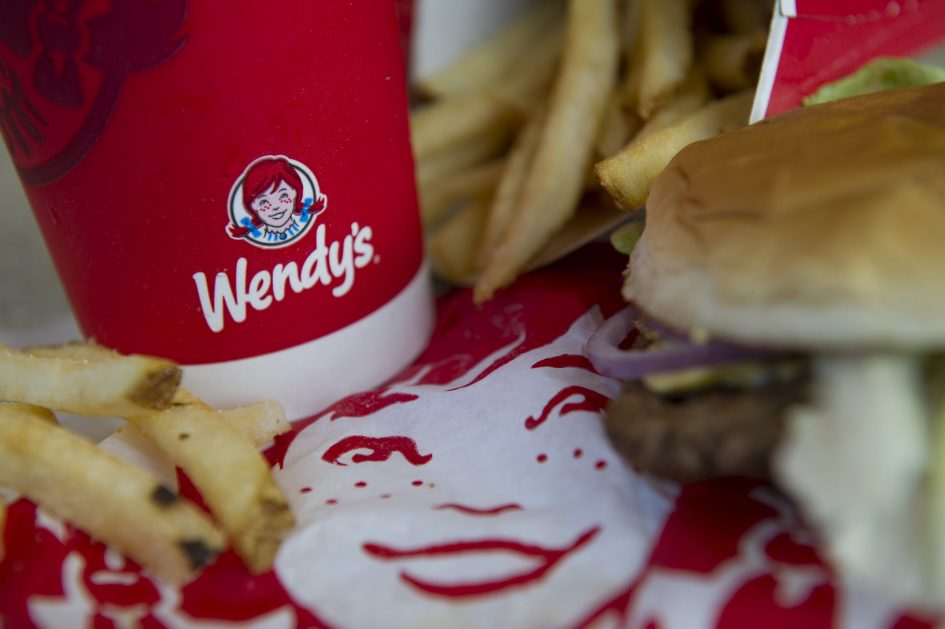 The Wendy’s Co. logo is seen on a cup displayed for a photograph at a restaurant location in Daly City, California.David Paul Morris | Bloomberg | Getty ImagesCheck out the companies making headlines in midday trading: Wendy’s— Shares of fast-food restaurant chain Wendy’s tanked more than 10% following a downgrade to neutral from buy from Guggenheim, citing Wendy’s “risky” entry into the breakfast food category. The firm said the new initiative is diluting free cash flow generation, as it caused the food company to slash its 2019 outlook. Maxar Technologies— Shares of the space conglomerate jumped 12.8% after J.P. Morgan began covering the stock with an overweight rating and a price target of $12 a share. The price target, set for the end of 2020, represents a 70% gain in Maxar’s stock. J.P. Morgan called Maxar “a high-risk/high-reward opportunity” as the company is in the early stages of a turnaround plan.Ford Motor— Ford Motor shares dropped more than 3% after Moody’s downgraded the auto maker’s credit rating to junk from investment grade. The credit agency cited potentially weak earnings and cash flow as Ford kicks off a long and costly restructuring program.Starbucks— Shares of Starbucks fell 4% after the Wall Street Journal reported the coffee chain agreed to give information to the Securities and Exchange Commission about its accounting practices. Dollar General— Shares of discount retailer Dollar General fell 2.5% following a downgraded from Bernstein to market perform from outperform. The firm said it sees sales and earnings growth as “less certain” than in the past. Bernstein said it prefers Dollar Tree as a defensive play. Mosaic—Shares of fertilizer company Mosaic rose more than 4% after it announced a $250 million share buyback plan. Mosaic also said it would slow its phosphate operations in Louisiana because more imports into the country have pushed down prices. Sanderson Farms— Shares of chicken producer Sanderson Farms fell more than 4% after the company received a subpoena related to the Department of Justice’s investigation into chicken pricing. The ongoing investigation is looking into allegations that poultry producers like Sanderson, Tyson Foods, and Pilgrim’s Pride conspired to fix poultry prices.Mallinckrodt— Shares of pharmaceutical company Mallinckrodt soared more than 50% after the drugmaker sold its contract development and manufacturing unit BioVectra to an affiliate of private-equity firm H.I.G. Capital for about $250 million. HD Supply Holdings— Shares of industrial distributor HD Supply tanked nearly 8% after missing analysts’ estimates for its second-quarter earnings. HD Supply reported revenue of $1.620 billion, compared to the $1.632 forecast by Wall Street analysts, according to FactSet. The company also issued full-year earnings per share guidance on the low end of the estimated range. The company see earnings per share of $3.45 to $3.60 per share, compared to the consensus estimate of $3.58 a share.Verizon—Shares of wireless carrier Verizon popped 1.5% after being named to Citi’s “positive catalysts” watch list. Citi said it expects shares of Verizon to trade higher into the company’s next earnings report due to a low rate environment. Verizon is know for its high and stable 4.1% dividend yield. — CNBC’s Michael Sheetz and Fred Imbert contributed to this report.