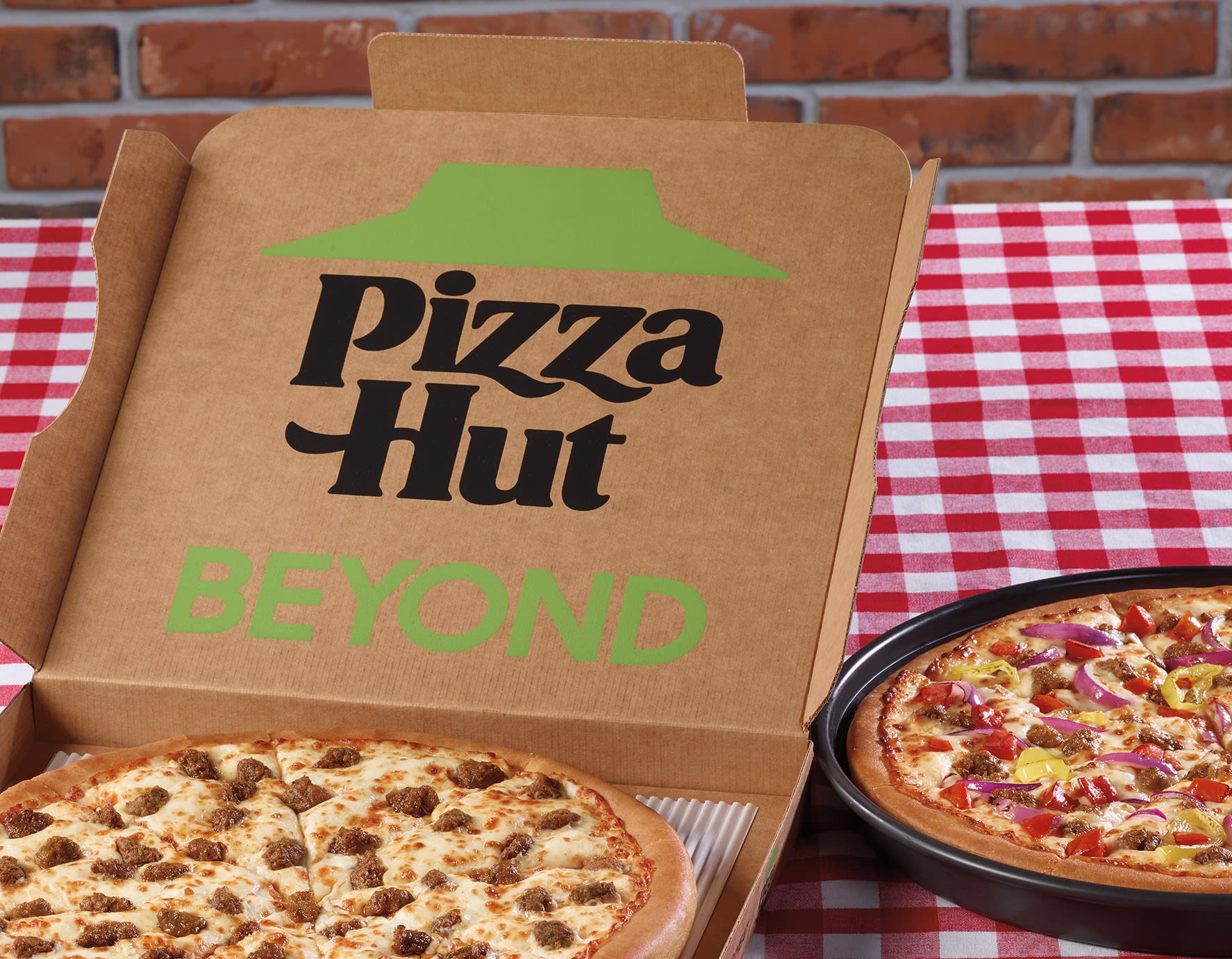 Pizza Hut’s pan pizzas with Beyond Meat sausagePizza HutPizza Hut is adding Beyond Meat’s meat-free sausage to its U.S. menu.Starting Tuesday, customers of the Yum Brands pizza chain can order the Beyond Italian Sausage Pizza or the Great Beyond Pizza. The main source of protein in Beyond’s meatless sausage is from peas, rather than animals.The coronavirus pandemic has revived Pizza Hut’s lagging U.S. business. Customers who viewed the chain as a dine-in restaurant have turned to ordering its pizza for delivery or takeout, accelerating Pizza Hut’s turnaround efforts. In the third quarter, Pizza Hut’s U.S. business reported same-store sales growth of 6%, with its off-premise business reporting 17% same-store sales growth.Beyond Meat, on the other hand, has been battered by the pandemic. Sales of its food-service segment shrank by 11% in the third quarter. But new partnerships could help boost that side of its business, which includes sales to restaurants, office buildings and college campuses. The company said Monday it has co-created a meatless patty for McDonald’s forthcoming McPlant line.Yum Brands and Beyond Meat already have an established partnership. Yum China began selling products from the maker of meat alternatives in Taco Bell, KFC and Pizza Hut restaurants over the summer. And Pizza Hut restaurants in Puerto Rico and the United Kingdom also sell the meatless sausage.Beyond Meat CEO Ethan Brown said in an interview that Pizza Hut pushed for a substitute that was indistinguishable from meat-based sausage.”We really wanted to build something that was unique in the market,” he said. “A lot of people can make a crumble out of protein these days, but this is something special because we took the time with Pizza Hut to get it right.”Pizza Hut previously tested a pizza with a meat substitute made by Kellogg. The test took place at a single restaurant in Arizona more than a year ago.”What we learned from that test is that there’s a lot of people out there who really want plant-based meat, and there’s a huge appetite for this type of product,” said David Graves, chief brand officer of Pizza Hut U.S.Little Caesars, which is privately held, has also tested a meatless sausage pizza. It used a substitute from Beyond’s rival Impossible Foods.Shares of Yum, which has a market value of nearly $31 billion, have risen 1% this year. Beyond’s stock, which has a market value of more than $9 billion, had more than doubled its value in 2020, as of Monday’s close. But Beyond’s stock fell sharply in extended trading. It was down 22% in Tuesday’s premarket.