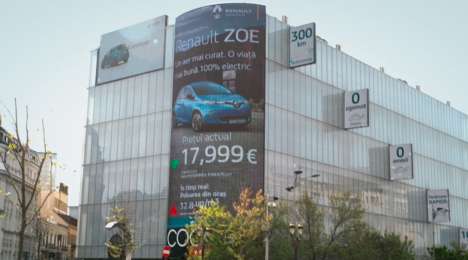 Romania’s capital, Bucharest, is one of the most polluted capital cities in Europe and to make an impact where it’s needed most, Renault set up a dynamic car billboard that offered a discount. Rather than just offering some kind of money-saving code, the pollution-activated DisCO2unt billboard was created to dynamically drop the price of Renault’s electric ZOE model as smog levels rise.

While many people tend to view electric vehicles as unaffordable, this creative card billboard helps to draw attention to the price of the Renault ZOE in an unmissable way. The pollution-triggered billboard updated itself every six minutes, giving people in the city the chance to secure a discounted price immediately via a smartphone. The clever Renault campaign for the zero-emission electric car speaks directly to people in the prime market for a cleaner car.