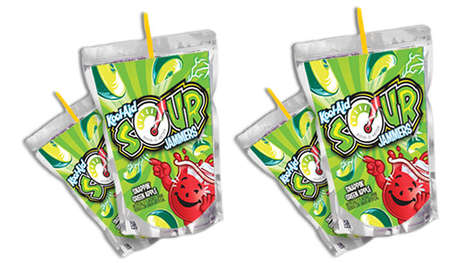 The Kool-Aid Sour Jammers have been unveiled as a new drink for kids that will satisfy those with a penchant for tart, sour flavor varieties. The drink has been developed as the first-ever sour refreshment for kids that is likely to be favored by youngsters who enjoy sour candy or who are experiencing fatigue with traditional sweet juice profiles.

The drinks come in five flavor options including Electric Lemon Lime, Shockin’ Blue Raspberry, Snapping’ Green Apple, Zappin’ Tropical Punch and Watermelon Slam. Each one is packaged in the familiar pouch-style container that has been previously observed with the Kool-Aid Jammers drinks.

The Kool-Aid Sour Jammers are launching this month at retailers nationwide and will come in 10 packs for just $1.99.