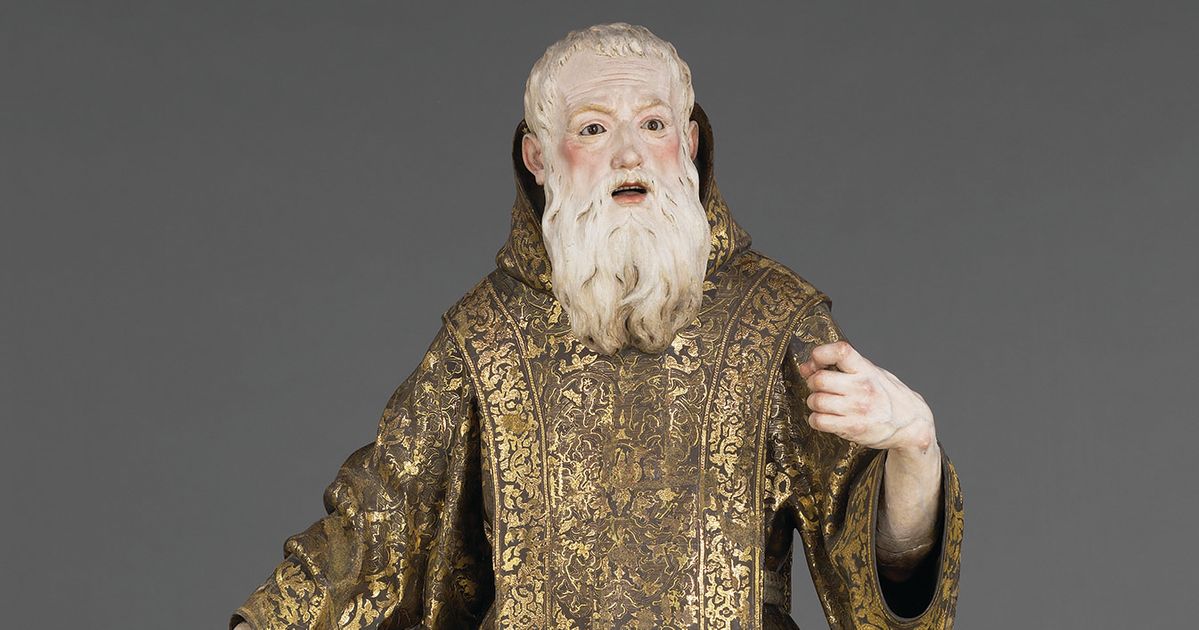 The earliest known document to credit a work of art to the 17th-century Spanish sculptor Luisa Roldán is a note that was discovered inside the hollow head of her wooden sculpture Ecce Homo (1684) during its restoration in the 1980s. The handwritten scrap asserts and implores: “This work was done by the hands of the esteemed artist Doña Luisa Roldán in company with her husband Luis Antonio de los Arcos who ask all those who [read] this to pray so that God will pardon their souls.” This carved figure of a brutally tortured Christ marks a period when Roldán forged her artistic identity after leaving her father’s sculpture workshop in Seville, where she learned her trade and established herself independently in Cádiz (something she would repeat elsewhere in Andalucía, and later in Madrid). Yet, rather than this bravura work or the revealing note, Catherine Hall-van den Elsen opens Roldán’s first English-language monograph with something entirely different: a petition she wrote to church authorities at 19, asking for permission to marry despite her father’s objections.Hall-van den Elsen’s curious introduction to this female artist with her marriage—and not her masterpieces—illustrates the challenge of researching someone like Roldán, where documentation is so scarce. Piecing together Roldán’s oeuvre—sculptures executed in polychromatic wood and terracotta, her figures often identifiable by their expressive faces, delicate brows, and parted lips—is an exercise in reading between the lines of contracts signed by her father, where the contributions of Luisa and her two sculptor sisters were implied, but not acknowledged, and later her husband, who signed contracts for works they co-created. She rarely signed works.

As Roldán’s catalogue of extant works solidifies, a picture of her life is still aeriform

Roldán’s father, Pedro, is easier to track in the archives, which may explain why the monograph has an entire chapter dedicated to his practice. That chapter is balanced by others demonstrating laborious archival research, plus a careful re-evaluation of works once attributed to Luisa. Even so, there is much still to be discovered and this monograph urges others to dig deeper. As Roldán’s catalogue of extant works solidifies (with a list of those in public and church collections appended to the book), a picture of her life is still aeriform.One part of Roldán’s life barely discussed is the role gender played in her career, despite the fact that this book is the debut instalment of a new series, Illuminating Women Artists, responding to the interest in “women artists who had nearly been lost to history”, as the commissioning editor Erika Gaffney observes. Around 15 Renaissance and Baroque artists are currently slated to be included and for some, like Clara Peeters and Josefa de Óbidos, this will be their first-ever monograph. Roldán is the only sculptor, and also among the few Spanish artists in the series.Although she was something of an outlier, Roldan’s terracotta and polychromatic wooden sculptures are increasingly garnering attention and have been acquired by museums such as the Metropolitan Museum of Art in New York, the Los Angeles County Museum of Art, the Museo Nacional de Escultura in Valladolid and Seville’s Museo de Bellas Artes over the past five years. “New works will no doubt continue to appear on the art market and new documents about her will continue to be found,” Hall-van den Elsen writes. “We will continue to build on our emerging understanding of how Luisa Roldán and her work came to represent a moment in Spanish history—as a woman and as a sculptor.” • Luisa Roldán (Illuminating Women Artists Series), Catherine Hall-van den Elsen, Getty Publications/Lund Humphries, 144pp, 83 colour illus., £30 (hb), pub. 1 September 2021• Karen Chernick is an art historian and writer based in Tel Aviv and a regular contributor to The Art Newspaper