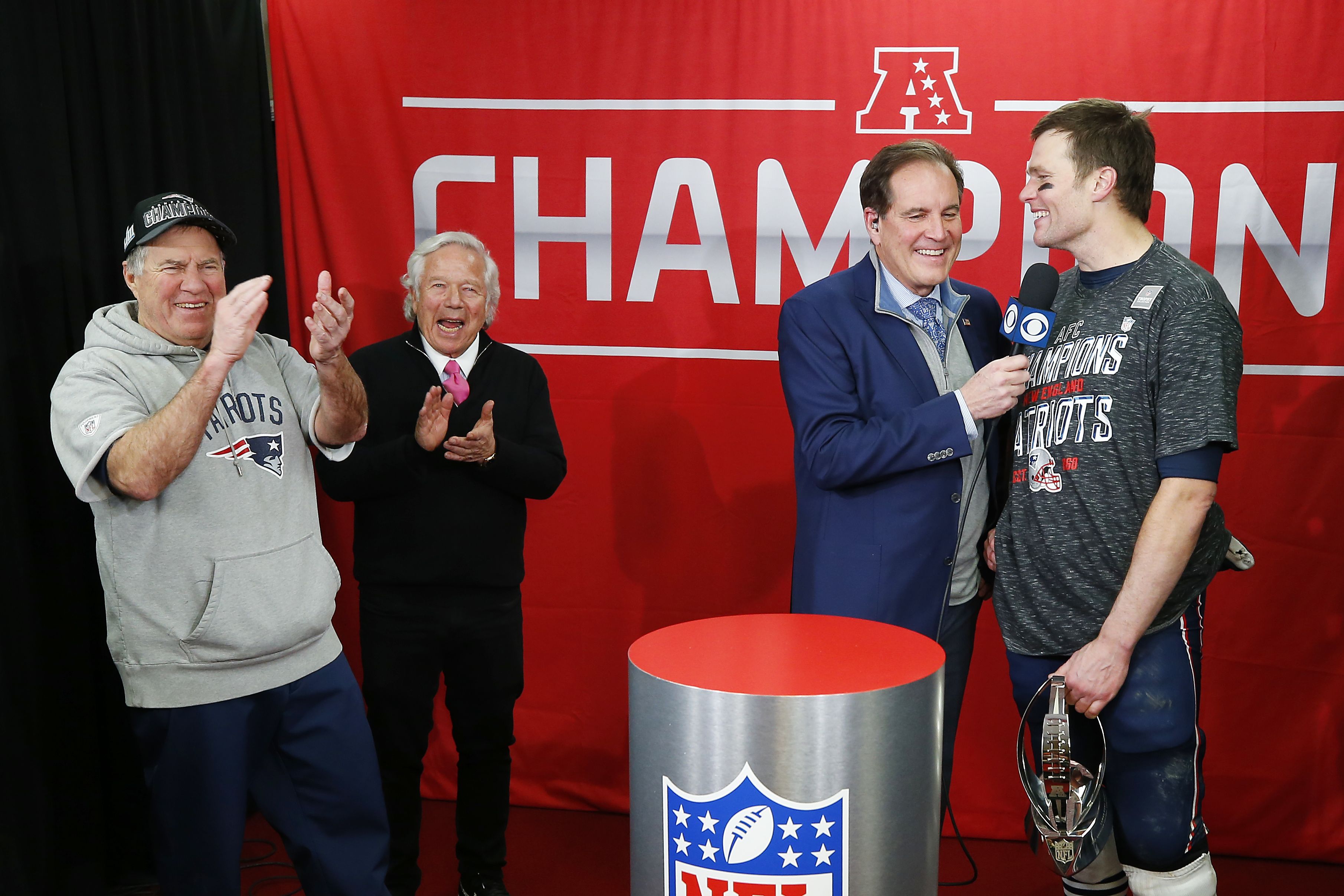 Tom Brady #12 of the New England Patriots is interviewed by Jim Nantz after defeating the Kansas City Chiefs in overtime during the AFC Championship Game as head coach Bill Belichick and team owner Robert Kraft react at Arrowhead Stadium on January 20, 2019 in Kansas City, Missouri.

Billionaire businessman Robert Kraft showed off his New England Patriots Super Bowl ring to a police officer minutes after leaving a massage parlor where he had just paid for sex with two female workers, prosecutors allege in a court filing.

And just a day after that discussion with the officer — whom Kraft had asked if he was a Miami Dolphins fan — the Pats owner returned to the spa for another sex-for-pay session with one of the women, prosecutors claim.

Kraft then jetted off to Kansas City to watch the Patriots beat the Chiefs in the AFC Championship game later that same day.

When his car had been stopped by a police officer the prior day, he had mentioned to the officer his plans for the game, prosecutors said.

The new details of Kraft’s interaction with police came in a court filing by the Palm Beach County State’s Attorney’s Office. He is charged with two misdemeanor counts of soliciting prostitution.

Kraft is seen on video from surveillance cameras police hid in the Orchids of Asia Day Spa in Jupiter, Florida, visiting the business on the two occasions in January, authorities say.

The 77-year-old widower has pleaded not guilty. He is challenging the legality of the surveillance videos, which are the key pieces of evidence against him and which were obtained through a “sneak-and-peek” search warrant signed by a judge.

A hearing in Kraft’s case was being held in Palm Beach County Court on Friday.

Prosecutors in their filing defended the legality of the warrant used to obtain the videos, arguing that Kraft “had no expectation of privacy while inside” the spa. A judge temporarily sealed the videos from public view earlier this week.

Prosecutors noted that while the sexual acts were being performed on Kraft during his first visit there, the door to the room he was in was opened eight times, which would have allowed anyone walking by the room to see him naked and being fondled.

Kraft is one of two dozen men charged in similar cases linked to the Orchids of Asia spa, among them John Paul Havens, the former president of Citigroup. Havens has pleaded not guilty, according to his lawyer, Bruce Zimet.

Kraft was taken to the spa that day in a white 2014 Bentley driven by his personal driver, Peter Bernon, according to the filing by prosecutor.

The filing said Kraft is seen on video paying cash at the front desk to a worker named Lei Wang, who took him to a massage room where “Robert Kraft completely undressed” and then partially covered himself with a sheet.

Wang and another woman, Mingbi Shen, then provided sexual services on him, according to prosecutors.

Afterward, Kraft “handed additional cash to both of the women and both gave the defendant a warm embrace,” the filing said.

Kraft then got into the front passenger seat of the Bentley and was driven away by Bernon, prosecutors said.

A Jupiter police officer pulled over the Bentley shortly afterward.

At the time, none of the police officers who had been watching the video feed from the hidden cameras knew the suspect “who had just committed the criminal act was Robert Kraft,” prosecutors wrote.

Kraft’s face was “clearly” seen on the body camera of the cop who pulled over his Bentley, according to the filing.

“Robert Kraft was very polite and respectful during the whole process,” prosecutors wrote. “The defendant asked Ofc. Kimbark if he was a Dolphins fan.”

“He said that the Patriots were playing the Chiefs,” according to the filing.

“Kraft then showed Ofc. Kimbark his Super Bowl ring,” prosecutors wrote, without identifying which of the then-five Super Bowl rings that Kraft could have at that time. The Patriots won their sixth Super Bowl in February.

“The officer asked the defendant his name again, and he said, ‘Robert Kraft,'” and gave the cop his Massachusetts driver’s license showing his name, according to the filing.

“The following day, January 20th, 2019, less than 24 hours after his sexual encounter with Mingbei Shen and Lei Wang,” Robert Kraft returned to the spa,” prosecutors wrote.

He then had a sexual encounter for pay with Wang, according to the filing.

Both Wang and Shen have been criminally charged by prosecutors with prostitution crimes. The women each have pleaded not guilty.