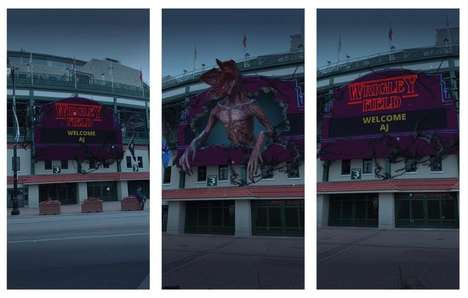 The Chicago Cubs teamed up with Snapchat to promote the new season of a hit Netflix show with a special augmented reality Stranger Things lens.

This spring, Snapchat announced its Landmarkers lenses, which bring famous landmarks to life like never before with augmented reality technology. Thanks to this new feature, those who visit Wrigley Field will also feel as though they’ve entered the Upside Down by pointing a smartphone at the ballpark’s marquee. This action welcomes Snapchat users to the stadium with a personalized sign that is suddenly shattered by a Demogorgon. This use of AR technology shows how social media platforms can be of use for creating dynamic, interactive marketing campaigns that don’t disrupt the immediate physical surroundings.

Snapchat’s Landmarkers are also available for sites like the Eiffel Tower and Buckingham Palace.