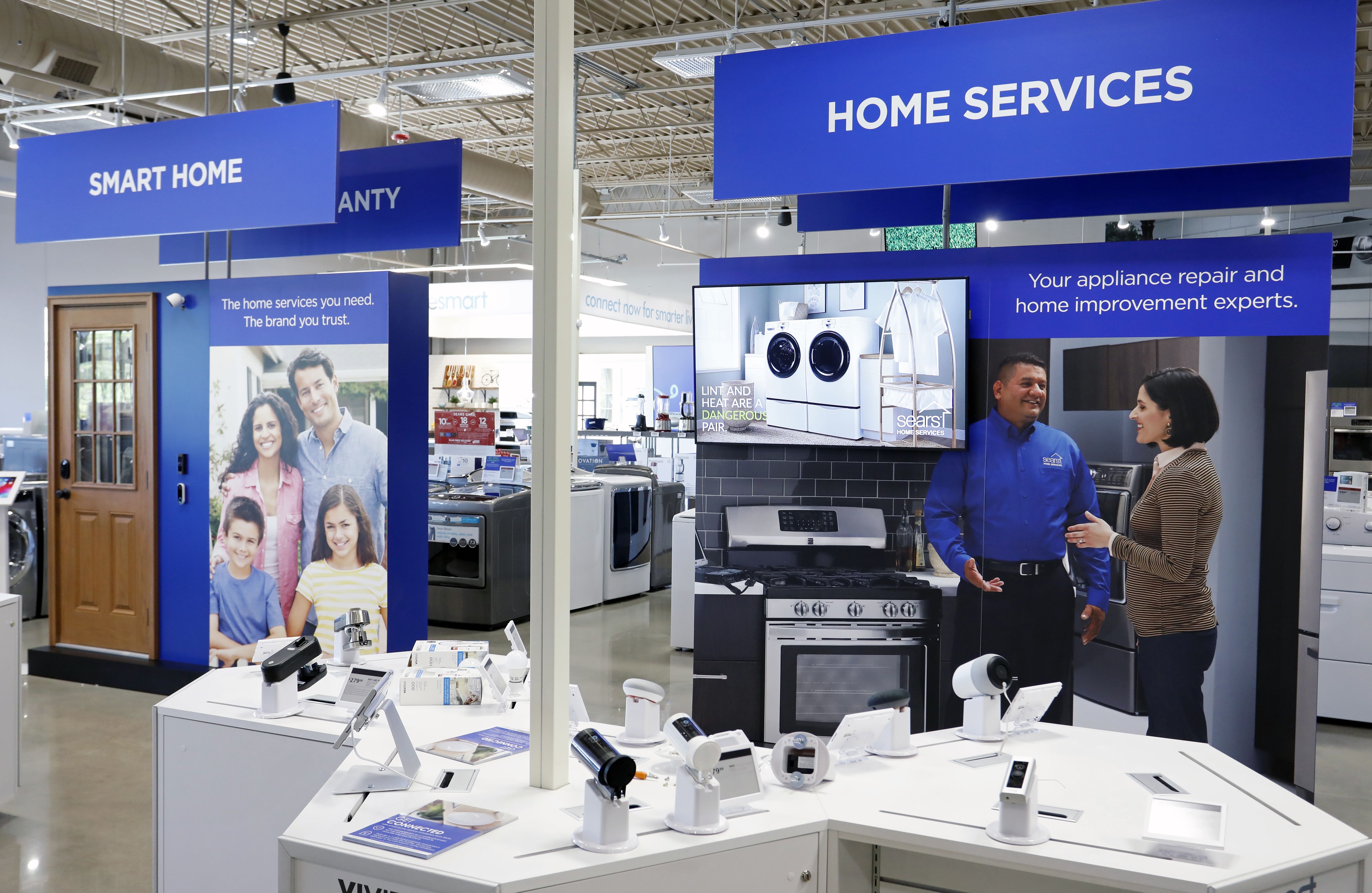 Like many suburban shopping areas, Overland Park, Kansas, has a Whole Foods grocery store and a Cheesecake Factory. Now, it’s among the first to have a Sears Home & Life store.

For five decades, from 1967 to 2017, Sears had presence in the booming town, which is also home to Sprint’s headquarters.

But the Sears department store and auto center at 9701 Metcalf Ave. went dark two years ago, to make way for a glitzy mixed-use development. This is the narrative many people associate with Sears these days: store closings and liquidation sales. But a shiny, new Sears Home & Life store is the tale the company wants people talking about as it looks for a fresh start after narrowly escaping liquidation.

Sears on Friday is opening its first such smaller-format stores — selling mainly mattresses, appliances and connected home products — in Overland Park and in Anchorage, Alaska, and in Lafayette, Louisiana. The company hopes these areas will draw new customers and nostalgic ones who shopped at now-shuttered Sears department stores in those neighborhoods and want the once-bankrupted brand back.

Sears is taking lessons from its storied past, with more than 125 years in business as an iconic American retailer, combined with its historic strengths in selling home goods like appliances, in hopes of creating its future. But it will also continue to face headwinds — like tariffs on consumer goods — and trendy, digitally native brands — like furniture retailer Wayfair and mattress-maker Casper — encroaching on its turf.

“We are looking for alternative ways to build our business,” Peter Boutros, chief brand officer for Sears and Kmart, and president of Kenmore, Craftsman and DieHard, said ahead of the Overland Park grand opening. “The brand has so much equity, … even with what we’ve been through.”

Sears Holdings, which owned Sears and Kmart, filed for bankruptcy protection in October with about 700 stores. A $5.2 billion sale saved the company, including its Kenmore and DieHard brands, and put everything into an entity called Transform Holdco. Transform Holdco is controlled by ESL Investments, a hedge fund owned by former Sears CEO Eddie Lampert, and has about 425 Sears and Kmart locations still operating throughout the country.

Sears Home & Life is the company’s next chapter.

The “Welcome” Service Desk at the Sears Home & Life store where customers can meet with experts and explore how new appliances would look in a full-scale kitchen.

“This is an evolution in response to two things in the market,” Boutros said. “We are known for our home services, appliances and mattresses. And the second thing is … customers still want to shop for big-ticket items, lay on a mattress to test it, or talk to a home service expert in a physical store.”

The retailer said it designed the Home & Life stores based on feedback gathered from opening a handful of smaller-format stores selling just mattresses and appliances in 2017 in Fort Collins, Colorado, Pharr, Texas, Camp Hill, Pennsylvania, and Honolulu. Those four stores are still open and will now be converted to Home & Life-branded locations.

Beyond the three openings Friday, Sears won’t say exactly how many Home & Life locations it plans to operate. But it says it’s already scouting other real estate across the country. And it seems to have a strategy for where it wants these stores to be.

“We are looking for emerging communities where young families are building homes,” Boutros said. “Also where boomers are downsizing. … What we have to do with the boomers group is win back their trust, win back their confidence — that they will come back and shop with us for all the things we are known for.”

Overland Park, for example, is considered one of the better suburbs to raise a family in the Kansas City area, with highly rated public schools. It was recently rated by neighborhood-review site Niche as the No. 1 city to buy a home in the U.S., ahead of places like Plano, Texas, and Raleigh, North Carolina.

Boutros’ team will also consider opening Home & Life shops where there are already full-line Sears stores, if there’s ample demand from Sears’ customers. But the new Home & Life locations are just a fraction of that size — at roughly 12,500 square feet — and are going to meet consumers where they’re spending the most time, likely not in enclosed shopping malls.

“Personally I think an open-air center … for convenience, driving up … makes more sense for us,” he said. “We are not as encumbered as being inside a mall. There’s more flexibility.”

The new Home & Life stores offer mattresses from brands like Serta, Sealy and Tempur-Pedic. They also sell small appliances like vacuums, major appliances such as those manufactured under Sears’ Kenmore brand and connected home products. Sears has a deal with Amazon in which some Kenmore appliances, like refrigerators, are now Alexa-enabled.

A huge focus of these stores is also service, the company said.

The Home & Life location in Overland Park has a service desk where shoppers can bring questions while they’re browsing. It has a “Search Bar,” akin to Apple’s Genius Bar, where shoppers can order anything from either Sears’ or Kmart’s website that’s not in the store and get it delivered. It also includes other services like curbside pickup and buy online pick up in store.

To be sure, when compared with other advancements retailers have been making to their bricks-and-mortar stores in recent years, Sears’ upgrades within the Home & Life concept might not seem that exciting.

Best Buy’s stores selling appliances have similar help-service bars with trained tech representatives, and expanded delivery options. Same with Home Depot and Lowe’s. Even big-box chains like Walmart and Target will give Sears’ growth strategy a run for its money — they offer many of the same items, like mattresses and appliances.

The mattress category in particular is being flooded with competition from start-up brands like Casper, Purple, Leesa, Tuft & Needle, Eight Sleep and Nectar, which sell directly to consumers, bypassing department stores. Mattress Firm is shutting more than 200 locations, as online mattress sales ballooned more than 60% in 2017. Does Sears Home & Life really stand a chance?

“I’m glad [Lampert] is still trying to find the format that works,” said Alan Lacy, former Sears chairman and CEO. “A point of differentiation with Home & Life is it has the Kenmore brand. That does still have some value, so there’s something to fight with there.”

“But a challenge is going to be the appliance category is something people purchase from rarely,” Lacy added. “The principal competitors — Home Depot, Lowe’s and Best Buy — all have shoppers in their stores with more frequency.” Sears’ competitors are more “top of mind” with many consumers in the U.S. today, he said.

Each Home Depot, Lowe’s and Best Buy reported same-store sales gains — a closely watched measure of a retailer’s health — during their latest fiscal quarters. Investments in their stores and websites are paying off and clearly still driving traffic.

Sears, by contrast, has seen its sales steadily decline. It went 42 quarters with only one three-month period of gains in same-store sales. Its last profitable year was in 2010. In the midst of its bankruptcy proceedings, it lost $318 million during the November-December holiday season, according to SEC filings, though some of that was because of bankruptcy costs.

Lessons from the past

Notably missing from the Sears Home & Life store in Overland Park is apparel, something Sears and Kmart locations have carried for decades. (Clothing and accessories can still be ordered at the store using the Search Bar.)

Of course, just because Sears is putting money into its Home & Life concept doesn’t mean it will work.

Sears less than a year ago devoted resources toward completely renovating a store at Oakbrook Center in Illinois. It trimmed the size of the store, added more modern fixtures and mixed up the merchandise. But seven months after the renovations were complete, the store shut in April.

Transform Holdco said it opted not to acquire the lease of the Oakbrook store because the location wasn’t making money.

Major appliances including Kenmore and other leading appliance brands, displayed in kitchen vignettes at the new Sears Home & Life store.

Tariffs stemming from the U.S.-China trade war could prove to be another headwind because some of Sears appliances, consumer electronics and other goods are made in China.

There’s also still baggage from the bankruptcy. Sears Holdings is suing Lampert, alleging he and other associates stripped the company of valuable assets while Lampert was CEO. Lampert and ESL Investments have denied doing anything wrong.

And there have been plenty of other retailers that have emerged from Chapter 11 bankruptcy, only to fall back on hard times. Payless ShoeSource, RadioShack and Gymoree are just a few examples.

“People are putting Sears down, but I am out in front to change that narrative,” Boutros said. “We are going to come out and come back strong. What happens over a period of time … you get to a stage where you’ve got to right-size and refocus. Sometimes that is a quantum leap to refocus.”