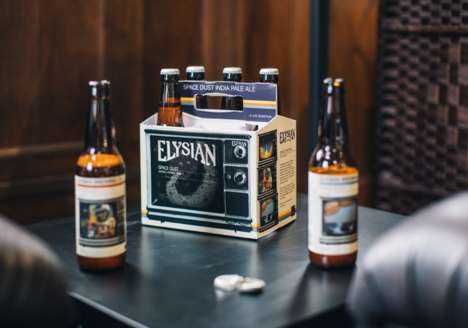 In honor of the 50th anniversary of the Apollo 11 moon landing, Elysian Brewing released a lunar-honoring Space Dust IPA 6 pack. Elysian Brewing company was founded in 1996 and is based in Seattle, Washington. The company is known for unique and unusual ingredients that offer innovative tastes.

The specialty beers feature retro-inspired labeling that celebrates each part of the voyage including ‘Lift-Off,’ ‘Landing,’ and ‘Return.’ The bottles feature a vintage television with vibrant paintings of iconic images from all three phases of the journey including one of an astronaut, one of the rocket launching, and one of the parachute landing. The new campaign will also feature a short video showcasing each flavor and design of the new and commemorative beers. These limited-edition beers will be sold beginning in June 2019.