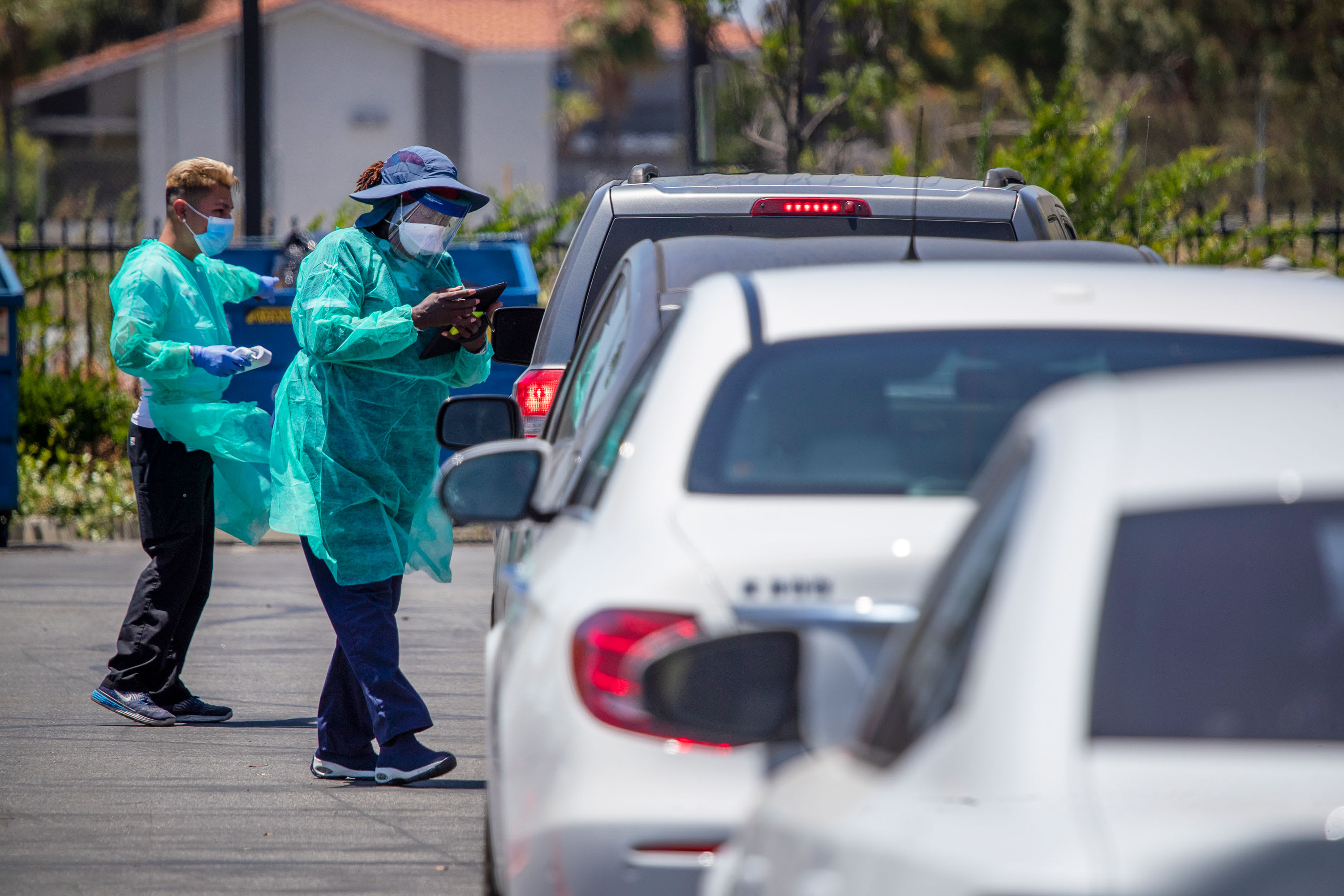 Wilma Thomas, right, a registered nurse, and Ricky Vargas, a medical assistant, process 50-to-65 patients per day getting COVID-19 tests at AltaMed Health Services in Anaheim on Thursday, July 9, 2020.Allen J. Schaben | Los Angeles Times via Getty ImagesThe surge in U.S. coronavirus cases has labs across the nation falling behind in processing and delivering test results with the turnaround time for Covid-19 tests taking days to a week or longer for many patients, two of the country’s biggest lab diagnostics companies said Monday.”We attribute this demand primarily to the rapid, continuing spread of COVID-19 infections across the nation but particularly in the South, Southwest and West regions of the country,” Quest Diagnostics said in a statement. The test manufacturer added that it can now perform up to 125,000 tests per day, roughly double its capacity compared with two months ago.”Despite that dramatic increase, demand for testing is increasing even faster,” the company said. “As a result, our average turnaround time for reporting test results is slightly more than 1 day for our priority 1 patients. However, our average turnaround time for all other populations is 7 or more days.”Priority one patients include hospital patients, pre-operative patients in acute care settings and symptomatic healthcare workers, the company said.Quick testing turnaround is crucial to the U.S. response, health officials say, so that infected individuals can be quickly isolated and contact tracers can find potentially exposed people early in their infection. Quest said it is working to ramp up capacity as quickly as possible, but “global supply constraints continue to be an issue.”The company said it is working on new technology to improve its testing capacity and bring on new partners to more quickly process test results. “Yet, we want patients and healthcare providers to know that we will not be in a position to reduce our turnaround times as long as cases of COVID-19 continue to increase dramatically across much of the United States,” the company said. “This is not just a Quest issue. The surge in COVID-19 cases affects the laboratory industry as a whole.”LabCorp, another coronavirus diagnostic test manufacturer, echoed Quest’s concerns, saying that demand for testing is outpacing their capacity. The company said it is processing more than 130,000 tests per day and plans to ramp that up to 150,000 per day by the end of the month.”Until recently, we have been able to deliver test results back to patients on average between 1-2 days from the date of specimen pickup,” a LabCorp spokeswoman said in a statement to CNBC. “But with significant increases in testing demand and constraints in the availability of supplies and equipment, the average time to deliver results may now be 4-6 days from specimen pickup. For hospitalized patients, the average time for results is faster.”The U.S. has processed an average of more than 665,000 tests per day between July 1 and July 12, according to a CNBC analysis of data collected by the Covid Tracking Project, an independent volunteer organization launched by journalists at The Atlantic. That’s up from a daily average of just over 174,000 diagnostic tests processed nationally per day through April, according to CNBC’s analysis.Since the beginning of the outbreak, public health officials and epidemiologists have called for the U.S. to invest significantly in test manufacturing and scaling up of the testing infrastructure. Harvard University published a report in April that said the U.S. would need to ramp up testing capacity to at least 5 million tests a day by early June and 20 million per day by late July in order to reopen the economy.However, the findings were dismissed by Adm. Brett Giroir, assistant secretary of health who is in charge of the government’s testing effort, as “an Ivory Tower, unreasonable benchmark,” adding that it was not needed based on the latest modelling at the time. Last month, as new cases of the coronavirus were beginning to surge again across parts of the U.S., President Donald Trump said at a campaign rally in Tulsa, Oklahoma that the growing outbreaks across the country were due to increased testing. He added that he told officials to “slow the testing down, please.”

Germany’s sex workers protest to go back to work amid coronavirus ban
Coronavirus drives Delta (DAL) to biggest loss in more than a decade
To Top
error: Content is protected !!
Top