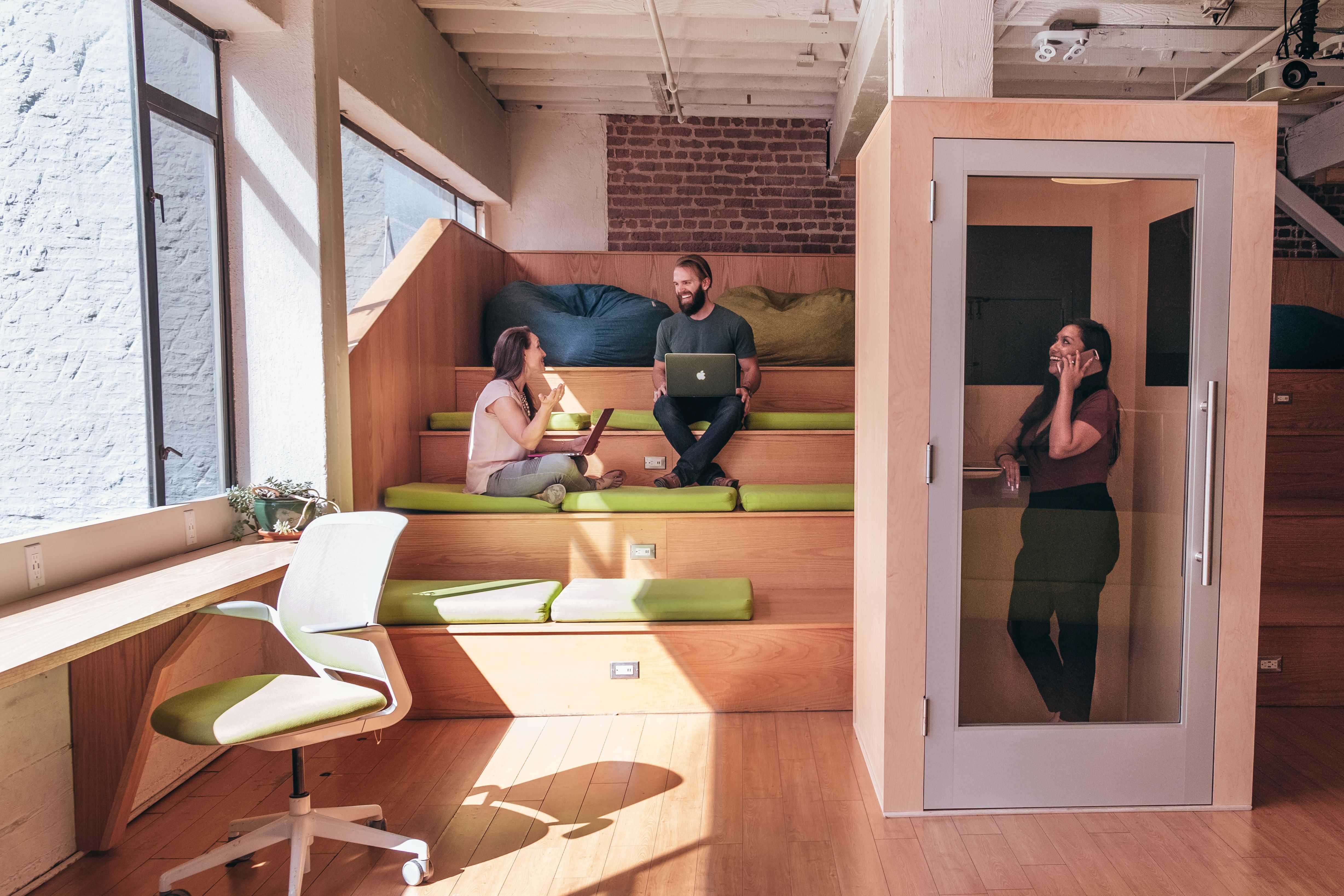 The open floor plan has become a minefield of distractions for office workers — the incessant ringing of phones, the chatter of co-workers, typing on keyboards — all of which threaten to undermine a productive workday.

These sleek, self-contained booths are increasingly being sought by employers and have been embraced by workers. They provide a quiet space for employees to conduct important phone calls, focus on their work or take a quick break.

“We are seeing a large trend, a shift to having independent, self-contained enclosures,” said Caitlin Turner, a designer at the global design and urban planning firm HoK. She said the growing demand for pods is a direct result of employees expressing their need for privacy.

While Frank Lloyd Wright introduced the open floor plan in the early 20th century, its popularity has skyrocketed in the last two decades, as companies look to promote collaboration, lower costs and create a more egalitarian environment. In 2014, 70% of companies had an open floor plan, according to the International Facility Management Association.

But rather than fostering a more united workforce, research shows that open floor spaces can actually cause social withdrawal, defeating the intended purpose. In a 2018 study, Harvard Business School researchers studied two Fortune 500 companies before and after a transition to the open floor plan.

They discovered that face-to-face time decreased by 70%, while the number of email interactions jumped by a range of 22%-50% of all interactions. Researchers said their findings could be explained by the fact that office workers eventually desire privacy and try to find it by interacting through digital rather than interpersonal means.

Pods can provide a break from the togetherness. The personal cubicles are minimal in design, often decked out with a chair, table, outlets, skylight, glass door and soundproofed walls. Prices can range anywhere from $3,495 for a single-user pod from ROOM to $15,995 for an executive suite from ZenBooth.

Pod manufacturers are expanding rapidly. In addition to Zenbooth and ROOM, there are TalkBox, PoppinPod, Spaceworx and Framery. Pod sizes also vary to include individual booths designed for a single user, medium-sized pods for small gatherings of two to three people and larger executive spaces that could host up to four to six people.

Sam Johnson, the founder of Zenbooth, said the idea for pods came from his experience working in the tech industry, where he quickly became disillusioned by the open floor plan. It was an “unsolved problem” that prompted him to quit his job and found ZenBooth, a pod company based in the Bay Area, in 2016.

He said the company is a “privacy solutions provider” that offers “psychological safety” via a peaceful space to work and think.

“We’ve had customers say to us that we literally couldn’t do our job without your product,” Johnson said.

The company now counts Samsung, Intel, Capital One and Pandora, among others, as clients, as it works in tech hubs including Boston, the Bay Area, New York and Seattle. Its biggest customer, Lyft, has 35 to 40 booths at its facilities.

“What I found is that when a company realizes employees don’t have enough space, it’s one of the top complaints, ” he said. “It’s an emotional problem — they’re willing to pay 10% more for rush [order].”

Pods are also extremely convenient to install. A pod can be delivered to an office in roughly 10-15 business days and set up in 30 minutes to an hour, while constructing a walled office could take three months or more.

Zenbooth rang up more than $5 million in sales in fiscal 2018 and is set to beat that number in 2019, according to marketing coordinator Mischa Szymanski.

The Milwaukee office of Keller Williams, the international real estate company, is a case study in how pods can improve workplace productivity. After renovating and moving into a new space, franchise owner Jeremy Rynders realized the collaborative space would not be enough for the 140 agents who worked there. Only 20 had their own private office, which meant most employees didn’t have a private space to talk with clients — an essential part of their work as realtors.

Rynders said the pods quickly became “a big success in our office.” The booths gave his agents an opportunity to focus on their work.

“I love them, as I’m able to connect better with potential clients,” said agent Lindee Burton. “I feel more relaxed and comfortable talking to leads/clients and I schedule more appointments when I use them.”

Burton said she recently used the booths to call old leads and book a listing appointment for her team.

Zac and Dawn Shipley, a married couple who work as a real estate team in the Milwaukee office, said they often use two booths at the same time when they are working, to avoid distractions.

Then, there’s a matter of size. An average North American office is an estimated 150 to 200 square feet, according to Mehigan Company, a real estate advisory firm. That means traditional offices on the lower range start at $9,750 and more spacious ones can be as expensive as $25,000. Further, a large executive office could be 400 square feet, or $50,000 on the higher end.

Pods also allow companies to navigate around tedious regulations, depending on the pod manufacturer. While traditional office spaces would have to go through inspections, some pods are already tested to meet fire regulations.

Mark Benhar, owner and president of Benhar Office Interiors, said pods became an office favorite at the New Jersey location of a global cosmetics company. It asked Benhar’s firm to create spaces in its open floor plan where employees could privately talk on the phone.

Benhar’s design team placed booths in connecting hallways and in four outer zones at the edges of the collaborative space. The project was so well-received among employees that the company plans to add pods to its other offices.

He said pods were once a niche trend he noticed at national trade shows in 2017 and 2018. Now, they’ve become mainstream.

“It started with tech companies and the need for privacy. People are embracing it,” Benhar said.