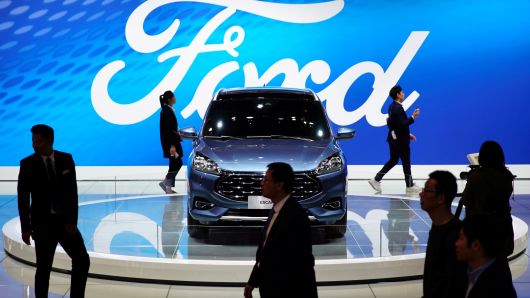 People walk by a Ford Escape SUV displayed during the media day for the Shanghai auto show in Shanghai, China, April 16, 2019.

Looking forward, Shanks said he anticipates Ford will improve on the results the company delivered last year. But he acknowledged the turnaround is far from complete.

“We have a lot of work to do. A lot of redesign of the business. We’re still somewhat concerned about the external environment,” said Shanks, a member of the CNBC Global CFO Council.

However, there are a lot of product launches in the hopper, he added.

On Wednesday, Ford announced it has invested $500 million in electric-truck maker Rivian to build a new battery-powered electric vehicle for the Detroit manufacturer. Shanks said the deal doesn’t change the company’s plans to spend $11 billion on electric vehicles through 2022.

Shanks called it a “win-win” for both companies.

“Working with a fantastic start-up like this that is looking at electrification and that part of the business with fresh eyes, we’re going to learn a lot from it,” he said.

Shares of Ford closed at $9.40 per share on Thursday but jumped to $10.13 in extended trading after the earnings report was released.

This stock can benefit from Intel’s pullback
Slack valued at $17 billion on secondary market ahead of public debut
To Top
error: Content is protected !!
Top