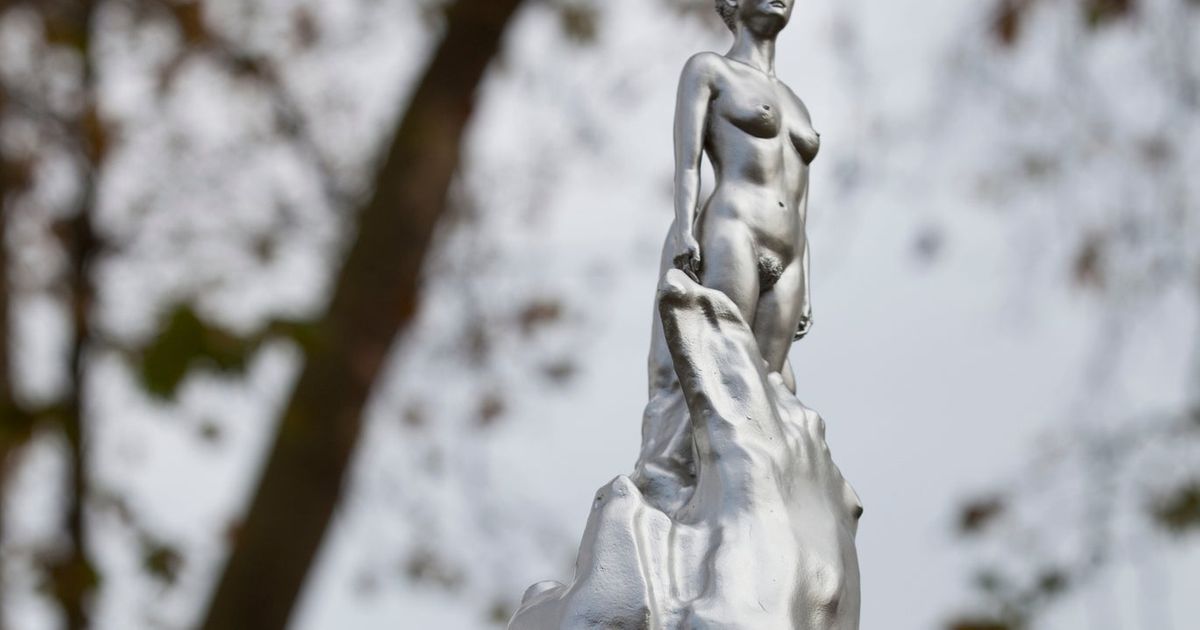 Following a decade-long campaign, Mary Wollstonecraft, the 18th-century English philosopher and women’s rights advocate, has been honoured with a statue in the north London neighbourhood of Newington Green, where she once lived. To be unveiled later today, the silvered bronze work by the British sculptor Maggi Hambling shows a naked woman emerging from a swirling mass, which represents “a combination of female forms which commingle and rise together as if one”, according to a statement from the Mary on the Green campaign, which raised £143,000 for the work’s completion. “She is Everywoman, her own person, ready to confront the world,” the statement adds. Often described as “the mother of feminism”, Wollstonecraft’s writings—in particular A Vindication of the Rights of Woman (1792)—are widely considered to have laid the foundations for the women’s suffrage movement. Written on the work’s plinth is a quote by Wollstonecraft: “I do not wish women to have power over men, but over themselves.” While the campaign’s website says that it hopes the memorial “will be a source of debate”, its wish may have been granted sooner that expected, as a number of art critics, curators and writers have taken to Twitter to deride the work. This is Maggi Hambling’s statue to commemorate Mary Wollstonecraft (unveiled yesterday) the great philosopher and educationalist best known for A Vindication of the Rights of Woman, written in 1792. I’m sorry but the statue is neither sensitive nor skilled, nor imaginative. pic.twitter.com/H2XqFOnpFI— Richard Morris: Art History in a Tweet (@ahistoryinart) November 10, 2020 “Feminism—invented by Mary Wollstonecraft—is about women doing stuff like emerging, silvery, large-headed, from wobbly generically feminine shapes—someone who definitely did the reading before making the statue”, tweeted the writer Amelia Horgan (@joan0fsnark). “Wonderful to see Mary Wollstonecraft honoured with a statue after 200 years, but this is a truly terrible work of art,” The Art Newspaper’s contributing editor Anny Shaw (@annyleshaw) writes. Others, such as the writer Imogen Hermes Gowar (@girlhermes) also questioned the relevance of the statue’s depiction of nudity: “Specifically what I hate is the sexy toned female on top. Nameless, nude, and conventionally attractive is the only way women have ever been acceptable in public sculpture. This was a chance to break from those conventions, no?”. She adds: “I thought Hambling was a great choice of sculptor for the knotty, dynamic quality of her work. I just don’t see how this piece fulfils its brief of redressing what they themselves point out: only 10% of commemorative statues are of women”. How many of our important male writers are depicted naked in their statues? You never see Charles Dickens with his balls out, do you? https://t.co/hL8XzcjmKp— Dr Laura Wood (@cooksferryqueen) November 10, 2020 Some, however, are simply pleased that an important female figure is being commemorated. “How wonderful—a statue to Mary Wollstonecraft!” says the writer and art dealer Richard Morris (@ahistoryinart). Other notable public memorials by Hambling include a statue in London of the playwright Oscar Wilde and a bronze scallop situated on a beach in Suffolk, in honour of the composer Benjamin Britten. Last month, a statue which depicts the ancient Greek goddess Medusa naked was subject to similar criticism after it was unveiled across from Manhattan’s Supreme Court.