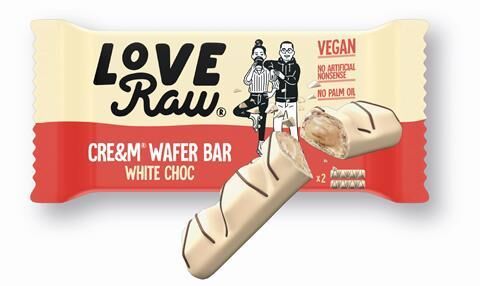 The LoveRaw White Cre&m Wafer Bar has been introduced by the vegan chocolate brand as a followup to the original Cre&m Wafer Bar that was launched six month ago to the delight of consumers alike. The bar is achieved using a 100% vegan-friendly white chocolate, and contains no artificial ingredients or palm oil in the mix. The bar is priced at £1.69 and will offer a tasty option to choose in favor of non-vegan alternatives.Co-Founder and CEO Rimi Thapar spoke on the new LoveRaw White Cre&m Wafer Bar saying, “As the world’s first mainstream vegan alternative to the popular hazelnut cream filled chocolate wafer bar, our original Cre&m Wafer Bar has performed exceptionally well in the six months since it launched, making it our most successful product line to date! We’ve been so taken aback by the reaction to not only the Cre&m Wafer Bar but our entire product range – to think that LoveRaw as we know it today was essentially built on the success of our delicious Butter Cups that launched over two years ago is crazy, and we couldn’t be more grateful for all the support we’ve received since then.”