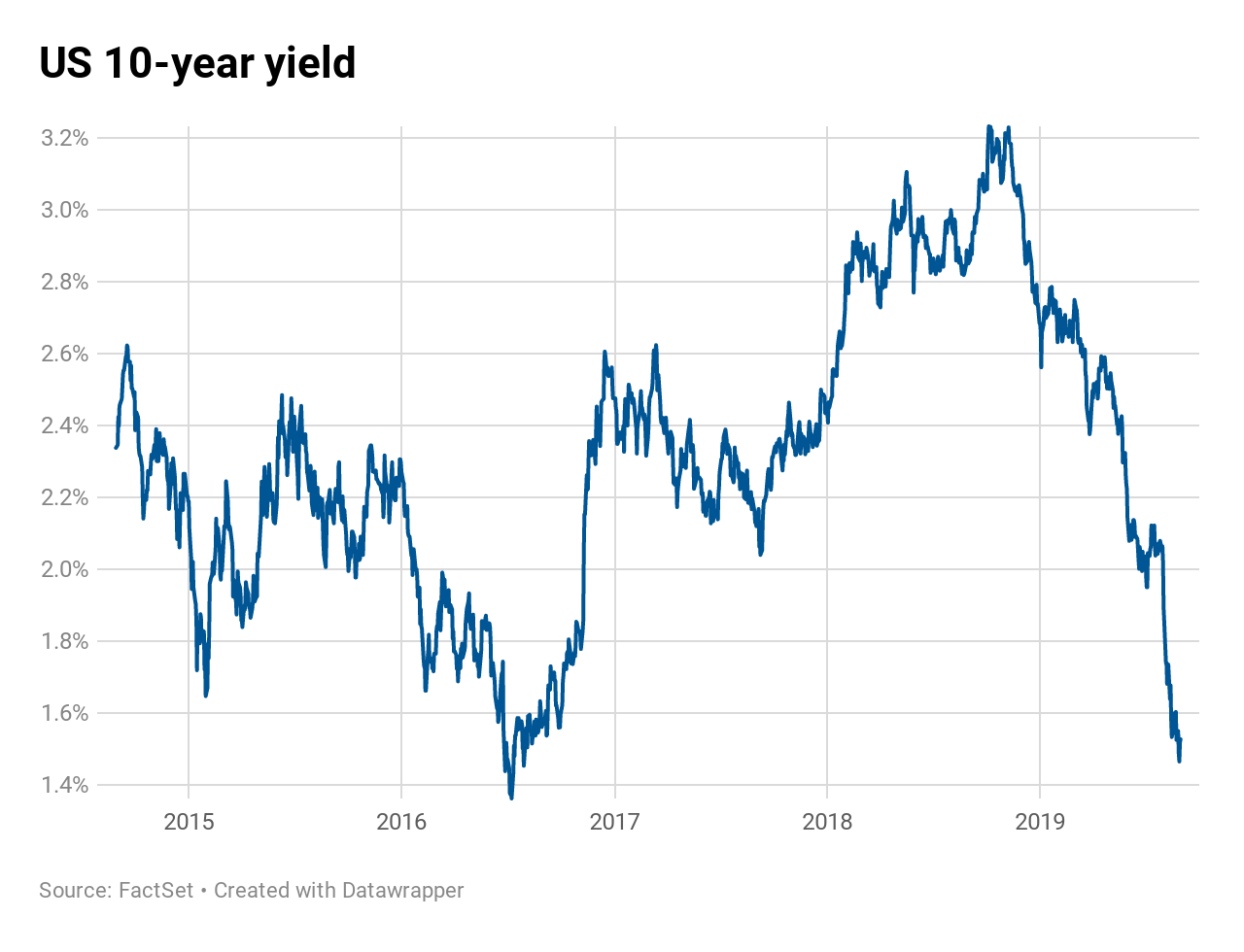 In normal times, the U.S. Treasury market could be described as “stable,” “reliable” or even “boring.” August, however, was not normal.

Long-term government debt yields in August posted one of their most dramatic downswings in recent memory as a surge in global demand for bonds forced prices up and rates down.

The benchmark 10-year Treasury note yield, for example, fell about 50 basis points for the month from highs above 2% to its current level around 1.5%. The last time the 10-year yield posted a fall of at least 50 basis in a single calendar month was January 2015, representing one of the single-largest monthly declines in the post-crisis era.

The 30-year Treasury bond yield fell to an all-time low 1.91% on Wednesday, tracking a similar swoon in rates overseas. The Japanese 10-year yield fell to a new negative three-year low this week while the German and French 10-year yield both hit record lows and the Italian rate dropped below 1% for the first time ever.

Strategists and economists said that trying to pin the August volatility to a specific event is tough, but Washington policymakers tended to be a common theme. The U.S.-China trade war in particular worried commentators, who warned that the dispute could continue for far longer than first anticipated and possibly threaten President Donald Trump’s reelection bid. 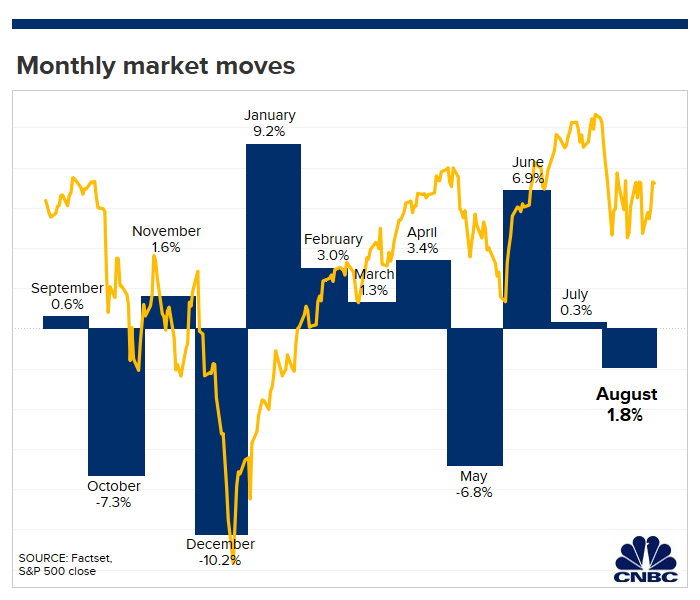 “I have to believe that the bond market – the long end – is responding to the expectations about where the economy’s going to go,” said Bill Poole, former president of the Federal Reserve Bank of St. Louis. “And it’s got this interplay of economics: The way in which firms are responding to the trade issues and expectations about what Trump’s going to do.”

Long-term rates fell so much that yields on the 3-month and 2-year notes exceeded longer-term rates in a phenomenon known as curve inversion, a sign many investors believe to portend eventual recession.

The bond market moves tended to coincide with volatility in the stock market. The S&P 500, down 1.8% in August, posted gains or losses of at least 1% during 11 of the month’s 22 trading days.

The angst began on Aug. 3, when Trump said that the U.S. would be placing 10% tariffs on another $300 billion worth of Chinese goods. China later responded by announcing it will impose new tariffs on $75 billion worth of U.S. goods and resume duties on American autos.

The Chinese response drew Trump’s ire on Twitter, where he said on Aug. 23 that he was ordering U.S. companies to “immediately start looking for an alternative to China, including bringing your companies HOME and making your products in the USA.”

The heated back-and-forth roiled the markets as investors lost faith in a longstanding belief colloquially known as the “Trump Put,” a bet that the president wouldn’t take the trade war so far as to put the U.S. economy in jeopardy.

Poole added that the fall in long-term rates was both warranted and understandable given the growing impact the trade war will take on real GDP growth.

“And there’s also now this extraordinary uncertainty about what Trump will do next,” Poole warned.

Those uncertainties manifested themselves in the U.S. bond market and shape of the yield curve, which as of Friday afternoon showed the yield on the 2-year Treasury note still above that of the 10-year rate.

When investors believe the economy is set for growth, bonds of longer maturities yield more than those of, say, one or two years. Though the credit of the U.S. government isn’t likely to change between two year and five years, bondholders are compensated more for loaning to Uncle Sam for a longer duration.

This normal, upward relationship between bond maturity and yield can change, however, if investors start to worry about a slowdown in GDP growth. Some pessimistic investors hoped that the Fed would have eased monetary policy beyond its quarter-point cut in July both as a way to lower short-term rates as well as assure Wall Street that the central bank would be quick if the economic outlook deteriorated.

“I read price action all year up until August as the market saying [the Fed] will put this midcycle adjustment in and it’ll work. Or that things aren’t bad enough, but the Fed will some insurance in,” said Priya Misra, head of global rates strategy at TD Securities.

Instead, what Fed Chair Jerome Powell categorized a merely a “mid-cycle adjustment” both failed to abate GDP growth fears and did little to delay the flattening of the yield curve. His speech from the Fed’s annual symposium in Jackson Hole, Wyoming, offered little clarity as Powell reiterated the central bank’s inexperience in dealing with the shocks trade disputes can have on the U.S. economy.

That makes upcoming industry data — as well as the FOMC’s meeting on Sept. 17 — all the more important, Misra said, pointing to upcoming manufacturing reports on the state of the U.S. and China’s goods output.

“If you get very good data — and I don’t just mean payrolls, that’s been good for a while … if you’re finding sentiment’s turning and payrolls remaining good, then maybe we go back to the 2016 scenario, which was the short manufacturing slowdown then everything became OK,” she said.

But if the data disappoints, and the weakness in Europe start to weigh on U.S. figures, “rates are going much lower,” she warned. “It’s not as if we can give back this entire move. A little bit of Pandora’s Box has been opened through August.”