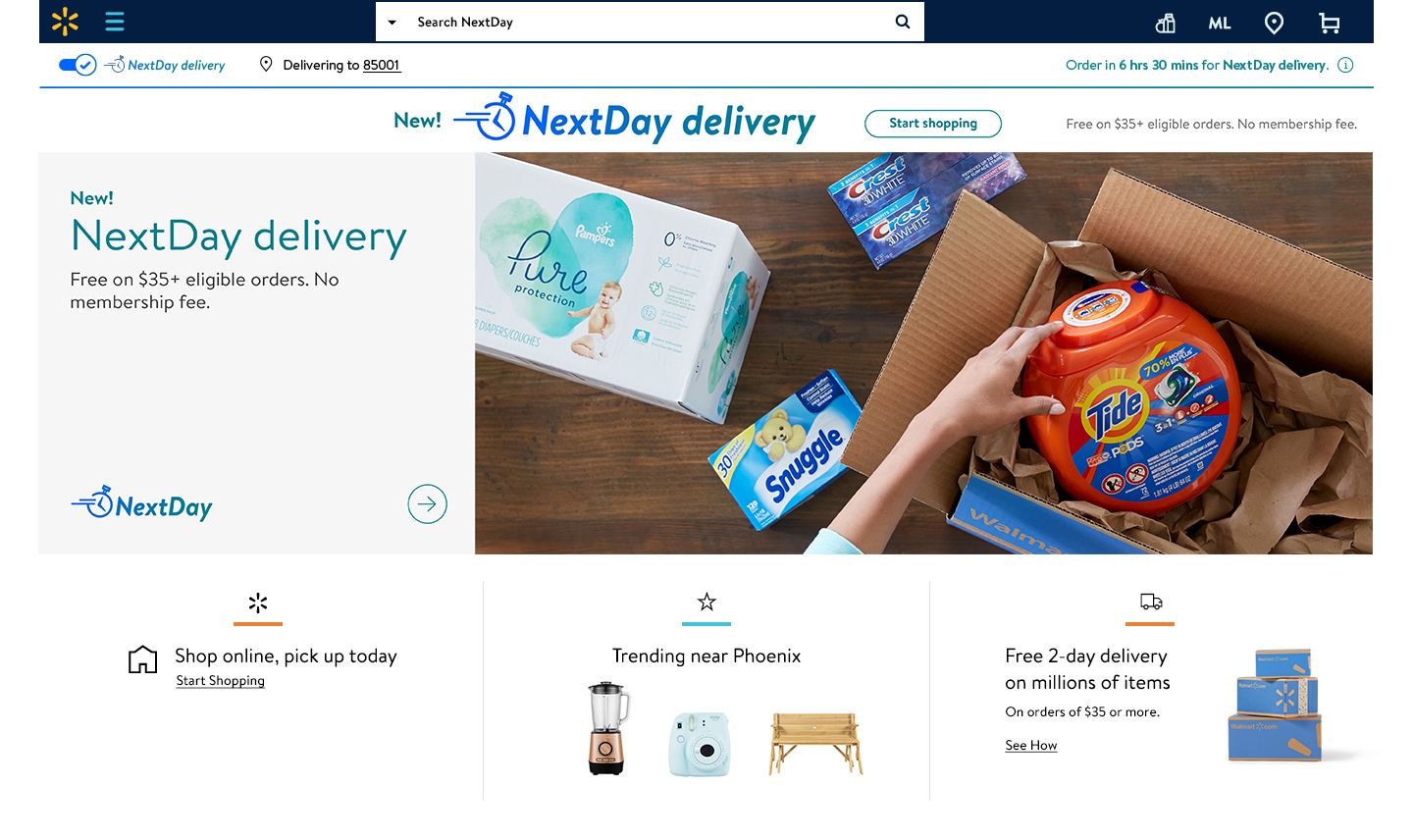 Walmart is firing back.

The biggest retailer in the world will now offer shoppers the option to have their online orders delivered the next day, following Amazon on April 25 promising one-day delivery for all Amazon Prime members and spending $800 million to improve its delivery infrastructure to make this possible.

Walmart on Tuesday is beginning its rollout of next-day delivery, starting in Phoenix and Las Vegas, the company announced in a blog post. The option will be available in Southern California over the next few days. And it will expand to reach roughly 75% of American consumers by the end of 2019, including 40 of the top 50 major metros in the U.S., according to Walmart.

Amazon hasn’t yet detailed a timeline for its own rollout of next-day shipping. But even before its April announcement, the company had offered same-day and two-hour delivery for Prime members in certain markets, for certain products and at an additional cost. Amazon’s next-day shipping plan expands the number of items and ZIP codes eligible for expedited service.

Walmart isn’t disclosing the cost of its latest delivery push. But the company says it’s been working on it for quite some time.

In January 2017, Walmart started offering free, two-day shipping for orders totaling more than $35, dropping its minimum purchase threshold, which had been $50 up until then. It had already bought Jet.com for $3 billion in 2016 to juice its online business and compete with Amazon. That deal helped it reach shoppers in bigger cities, like New York, in less time.

“We have been working on this for the past several years,” Marc Lore, the head of Walmart’s e-commerce business in the U.S., said about the move toward next-day shipping. “We’ve been investing … and now we are in the position to reap the benefits.”

To start, next-day delivery will be available for roughly 220,000 items “most frequently purchased” online, Walmart said, including toys and electronics. The company said it plans to make more items available to ship next-day over time. And the option is only free for orders over $35. Amazon, for comparison, has no minimum purchase threshold for free, next-day delivery but requires customers to have a Prime membership, which costs $119 annually.

“This is the future of the Walmart.com supply chain,” Lore said. “The more products we add to this experience … the more profitable the orders will be.”

When Amazon made its one-day shipping the new standard for all Prime customers last month it sent shares of Walmart and Target tumbling, as investors worried bricks-and-mortar retailers would now have to spend more money to match the e-commerce giant’s steps.

“It’s this nebulous thing called the Amazon effect,” said John Bonno, a managing director in the retail practice at AlixPartners. “I think retailers are so afraid. … [They’re] so nervous that any new service that Amazon offers, retailers feel they need to go through hoops,” to match it, he said.

Buy online, pick up at the store

That said, companies like Walmart and Target have something Amazon doesn’t have — networks of thousands of stores across the country. Stores help these companies offer a click-and-collect option, where a customer can place an order online, drive to the store, and pick it up that same day. Walmart, for example, says it’s on track to offer pickup for online grocery orders at 3,100 stores, and same-day grocery delivery from 1,600 locations, by the end of the year.

“Walmart wants to make the promise they are doing everything they can to be as convenient as possible,” said Laura Kennedy, a retail analyst for consulting group Kantar. “They have to meet shoppers’ expectations. … Amazon has set those for the last 10 to 15 years.”

A recent report from UBS estimated it would cost Walmart $215 million in incremental investments, based on the company’s e-commerce revenues, to match Amazon’s one-day shipping offering. UBS added this would be “quite manageable” for Walmart to achieve.

Lore had told analysts during a meeting last fall that Walmart was already capable of reaching 87% of the country with next-day delivery.

Meantime, Amazon is already capable of offering same-day and one-day delivery to 72% of the total U.S. population, according to RBC Capital Markets.

Lore explained the push toward one-day delivery ultimately makes “good business sense” for Walmart. He said this means shoppers will start to receive all of their items in one box — because with next-day delivery, each order is going to be sourced from the nearest distribution center, and only that one.

If a shopper wants a pack of diapers, a Star Wars toy, a coffee mug and a pair of headphones delivered the next day, for example, all of these items will need to be available at one warehouse. If one item isn’t available, the shopper will be presented with the option to “save it for later,” and order the others for the following day. Or, the shopper can still order everything — likely receiving the shipment in multiple boxes — for two-day delivery, or beyond. (Cut-off times for next-day deliveries will vary by market, Walmart said.)

Walmart has done “extensive work” to make sure it has the right items at the right fulfillment centers, Lore said. The company isn’t planning to source next-day shipments from its stores.

Not everyone is buying into next-day delivery being the next big thing for retailers.

If Walmart finds out this effort isn’t profitable, the company will stop offering it, said Sucharita Kodali, a retail analyst at Forrester Research. She compared it to when Amazon started offering overnight delivery on shoes to compete with Zappos.com. Then Amazon bought Zappos. “It was an unsustainable arms race … and eventually they just stopped,” she said.

“Something like next-day delivery is a short-term burst of excitement. It’s great for shoppers. … Customers win when Walmart and Amazon are duking it out. But is it long term?” Kodali asked. “At the macro-economic level, it’s not sustainable.”

Instead, she thinks more retailers should lean into offering buy-online-pick-up-in-store options, utilizing their real estate and saving on shipping expenses.

A recent survey from Coresight Research found roughly 46% of online shoppers in the U.S. had picked up an internet order from a bricks-and-mortar store in the past 12 months. The top retailers with this option were Walmart, Target, Best Buy and Home Depot, Coresight said.

Target — which offers free, two-day shipping for all of its credit card holders, with no minimum purchase requirement — now has a curbside pickup option for shoppers at over 1,250 stores. It offers in-store pickup for online orders at all of its 1,850 locations.

Amazon, still in its race to get boxes to customers as fast as possible, on Monday said it will start giving its current employees up to $10,000 in start-up costs to quit their jobs and form businesses delivering Amazon packages. If accepted into the program, the delivery helpers will be able to lease vans from Amazon. The offer is open to most part- and full-time Amazon employees, the company said, but not to Whole Foods workers.