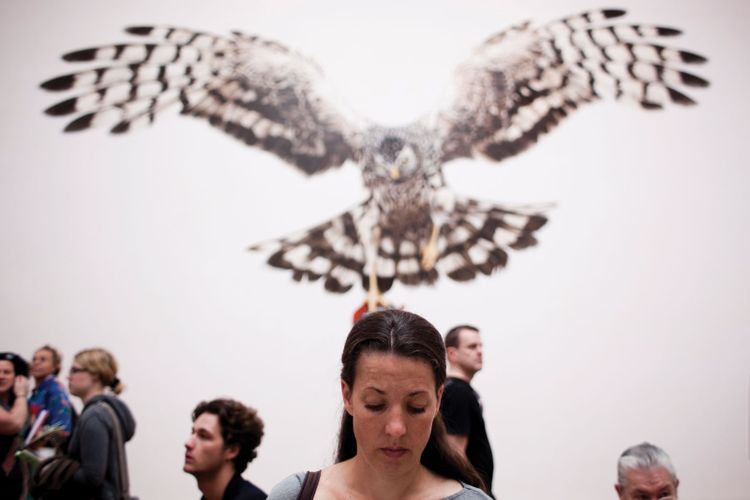 
Jeremy Deller’s British pavilion at the Venice Biennale in 2013
© Italo Rondinella 2013. Courtesy of the Artist and The Modern Institute/Toby Webster Ltd, Glasgow


In 1964, Robert Rauschenberg won the Venice Biennale’s Golden Lion for painting. It was a choice soon imbued with wider significance. For art historians, it marked the point when the US’s artistic triumph over the Old World was acknowledged. For the art market, it was the moment when Pop Art entered the canon. But 55 years ago, Venice was one of just seven international “perennials”. Now, with around 320 biennials, 280 art fairs and more than 1,000 major art museums worldwide, it is hard to imagine one exhibition wielding such power. So, does the Venice Biennale still matter?

Not so much, say its detractors—and they find much to criticise: there are too many biennials, and Venice is especially bloated. The director’s sprawling show is diffuse; the national pavilions anachronistic. It is underfunded and overly commercial, propped up by dealers and collectors, with too many parties, symbolised by the multimillion-dollar yachts that moor along the Viale Giardini Pubblici. For his British pavilion show in 2013, Jeremy Deller painted the social reformer William Morris hurling Luna—the superyacht then owned by the Russian billionaire Roman Abramovich—into the lagoon, with the implication it might be time to sink the lot.


Yet on the preview days, 25,000 artists, collectors, curators, museum directors and journalists flood into the city, followed by 600,000 visitors in the months after. Part of the appeal is Venice itself, a miraculous 1,500-year-old survivor, built on thousands of wooden piles driven deep into the mud. “For better or worse, the Biennale catches the zeitgeist; you get a sense of the broader issues that are playing out in the art world,” says Emilie Gordenker, the director of the Mauritshuis in the Hague. “The location is unique: you can see contemporary art and then go to see a Titian at the Frari. It’s uplifting.”

Then there is the director’s show, which since the 1970s has come to be the centrepiece of the Biennale. Until then, Venice was a glorified world’s fair—a disparate range of national and international exhibitions. The 1972 edition was the first to break that mould when director Mario Penelope introduced a theme for his exhibition, Opera o Comportamento (Work or Behaviour), which coincidentally started a long tradition of dubious titles. But it was another perennial that year—directed by the Swiss curator Harald Szeemann—that has gone down in art history.

Documenta 5 broke “significant curatorial ground”, wrote Bruce Altshuler in Biennials and Beyond, a study of the significance of perennials. The fifth edition of the quinquennial, in Kassel, Germany, “established the model of the ambitious thematic exhibition assembled to interpret [works of art] according to a grand curatorial conception”, Altshuler wrote. He went on to forensically analyse it and Documenta 11, but not a single Venice Biennale.

Documenta is now the better funded of the two. Adam Szymczyk, the director of the 2017 edition, spent €45m and enjoyed four years’ full-time research. This year’s Venice Biennale director, Ralph Rugoff, has had €13m and less than 18 months to mount his show, while retaining his day job directing London’s Hayward Gallery. “Documenta has come to be recognised as a leading exhibition and is considered more serious and weighty [than Venice],” says Shwetal Ashvin Patel, whose On Curating Global Biennale Survey, released in 2018, revealed the scale of international “biennialisation”. However, he says “it lacks the glamour, the joie de vivre, the art historical importance and the strong brand identity of Venice”.


Ironically, the national pavilions—frequently derided as outmoded, nationalistic, even xenophobic—and the plethora of surrounding shows probably make the difference. This year there are 90 national pavilions, while the list of museum and independent exhibitions is still growing. “Venice is the mirror of the art world, artistically and geopolitically,” says Patrizia Sandretto Re Rebaudengo, the founder of the Turin-based non-profit Fondazione Sandretto Re Rebaudengo. She remembers her first Venice Biennale in 1993 “as a collector”, where she was introduced to the work of Doug Aitken, Charles Ray and Felix González-Torres—all artists “now in the collection”.

Philomene Magers, the co-founder of the commercial gallery Sprüth Magers, which represents five artists in this edition, says: “If you are lucky, you get to see a significant, well-curated main show.” But because there is no single curatorial voice, “every single time you get to see artists who are real eye-openers”, she says. For some artists, a Venice presentation can be career-defining, as was the case for Pipilotti Rist in 1997 and 2017’s Golden Lion winner, the German artist Anne Imhof.

“Sometimes you get marginal shows,” says the art adviser Lisa Schiff, “but you don’t get the zeitgeist by just looking at Instagram; it’s about being there.” Venice can be high pressure for those in the market: Schiff says that part of her job is “scouring the Arsenale to see if there are really significant works you might want to place with one of your collectors”.

As well as the central show and national pavilions, which twist dealers’ arms for financial contributions, parallel events are funded by commercial galleries. These include shows of Adrian Ghenie (Thaddaeus Ropac) and Helen Frankenthaler (Gagosian). “One way or another, Venice has become fertile marketing and selling ground,” Schiff says, drily. (Arguably it always was: until 1968, the Biennale had a sales office and kept a percentage of the sale price as commission.)

The Venice Biennale is often called “the art world Olympics”. But the soubriquet is misleading, implying an orderliness, a measurable meritocracy, and clear winners and losers that is difficult to discern. (In 1964, the counterpart to Rauschenberg’s painting prize—the Golden Lion for sculpture—was won by a now barely remembered Zoltan Demeny.)

“Venice matters because it is one of the few places that the art world visits en masse,” Patel says. “It combines historical importance, glamour and one of the most beautiful cities in the world with huge egos and large amounts of money.” In that, it more closely resembles the World Economic Forum in Davos or a United Nations Climate Change summit—massive, messy, maddening—often with substance and flashes of brilliance amid the preposterous posturing. And for one week in May, most of the art world’s eyes will once again be upon it.

Spanish still-lifes test the staying power of a dealer’s legacy at Christie’s
Video | There’s news at The Art Newspaper
To Top
error: Content is protected !!
Top