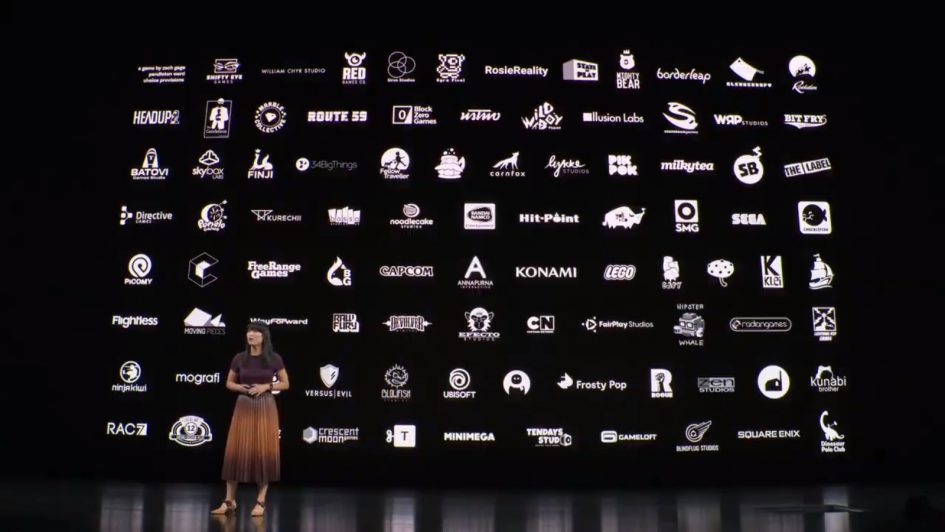 Apple announced Apple Arcade at its launch event.Source: YouTubeApple officially announced the launch details on Tuesday for its subscription gaming service, which will give users access to more than 100 new and exclusive titles they can download from their iPhone, iPad, Mac or Apple TV.Apple Arcade, as the offering is known, gives the company another way to generate revenue from software and services as it tries to reduce its dependence on devices, particularly the iPhone. Apple teased the gaming product in March before unveiling it Tuesday at an event at its headquarters in Cupertino, California.The service is available for $4.99 per month, starting on Sept. 19. Apple will offer users a one-month free trial.Apple Arcade will be accessible from a dedicated tab in Apple’s App Stores. It will feature game trailers, recommendations and editorial content.When Apple first talked about the service, it showed off a few of the games that will be available, including Beyond A Steel Sky, Overland and When Cards Fall. On Tuesday Apple said that Capcom, Konami, Lego and Sega are also working on games for Apple Arcade.Subscribers can share access to the service with family members. Customers can play games on their devices offline, giving it a possible advantage over coming game streaming services such as Google’s Stadia and Microsoft’s xCloud, which require internet connections.The new Apple Arcade will contribute to the services business alongside Apple Music, iCloud and other products. Earlier this year the company stopped telling investors how many iPhones it sells each quarter. Apple started disclosing the gross margin of its growing services business.WATCH: Apple’s gaming service Arcade could set off a ripple effect through the industry, says analyst