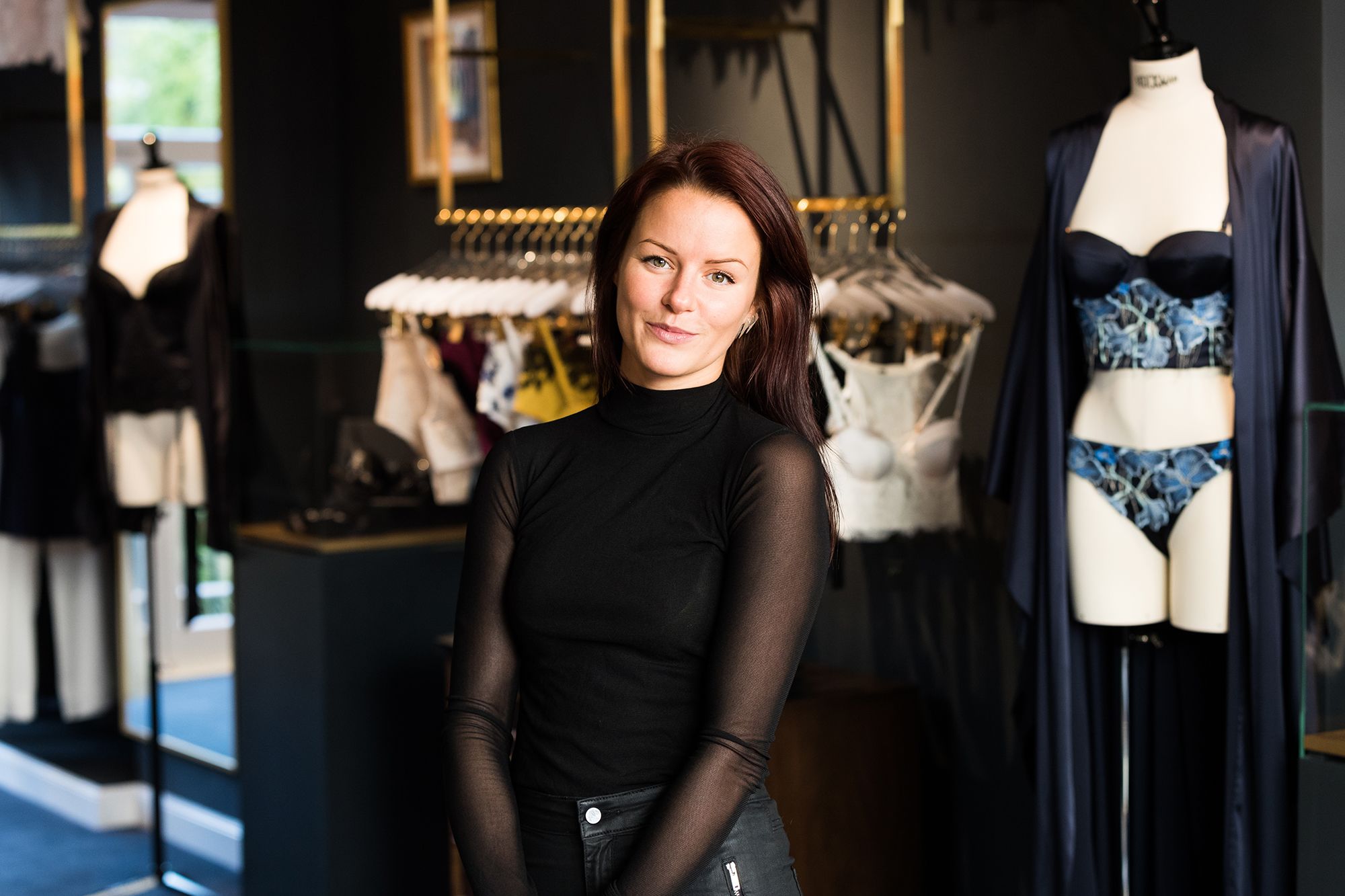 At age 22, with no formal fashion education Claudia Lambeth took a giant leap and started a one-of-a-kind luxury lingerie line while she was in law school.

With just a little seed money she inherited from her grandfather, Lambeth was able to purchase fabrics and other materials she needed to build her first bra and develop lingerie patterns that helped start her company, Luna Mae London, in October 2012.

Luna Mae debuted in the U.S. in 2015, and Lambeth now calls some of the wealthiest women on the planet devoted clients. Sales have tripled for the past two years in a row, she said.

Lambeth’s vision was to create an ultra-high-end bespoke line of sexy undergarments. She wanted to bring Savile Row to women’s lingerie using luxe fabrics and high-craft tailoring with prices that rival and sometimes surpass the cost of custom-tailored suits for men.

“My quest was just building the most beautiful, luxurious, comfortable, best-fitting bra I could and I knew that because I didn’t come from a fashion background, I had to really understand and sink my teeth into understanding the construction of a bra,” she said.

Lambeth sells knickers (that’s what they call panties in England) made of French silk that start at $800, and bras of the same material that cost around $2,300. And she’s now designing bathing suits that cost more than a car.

Lambeth invited CNBC to the English countryside for a behind the scenes look at a couture black one-piece swimsuit she’s selling for over $63,000.

The corseted suit is covered in seven hand-sewn butterflies made out of a rare metallic thread and layered with Swarovski crystals and beads that cost more than $600 a piece.

Hand-sewn butterflies that cost $600 a piece

The bespoke piece also has 18-karat yellow gold fasteners and is accented by a 9-carat diamond broach created by celebrity jeweler Stephen Webster.

Webster’s diamond butterfly is included in the price and is not sold separately.

But Lambeth’s globetrotting clientele don’t seem to mind spending tens of thousands of dollars for her custom couture.

The designer said she’s sold several swimsuits in this price range inspired by her black one-piece and no two pieces she creates are alike.

Plus, her clients are willing to wait months for a personal fitting. Some make appointments at her flagship store in London while they’re in town. Others prefer Lambeth come to them, and she’s willing to travel anywhere in the world for a fitting.

“One of my largest commissions was listing out a quote for a 50-piece bridal collection,” said Lambeth. The collection was designed for a client in the Middle East who ended up purchasing every undergarment she sketched.

Lambeth signs non-disclosure agreements with her ultra-high-net-worth clients, so she’s not allowed to disclose the total for that commission but given her price points, one can imagine that single order could be worth hundreds of thousands of dollars.

Lambeth’s journey to become a successful CEO and entrepreneur is almost as interesting as the beautiful garments she builds from scratch.

From a young age, Lambeth was obsessed with lingerie and knew she wanted to be a designer but after graduating from high school, her father insisted she pursue more practical academic studies like the law.

Lambeth thought, “he must be joking,” but after some consideration she felt that because fashion was a huge passion of hers she would be able to learn it on her own.

“I definitely could not teach myself law!” she said. “I wanted to be treated as a businesswoman and a female entrepreneur and I considered a law degree to be a subject that people respected.”

Lambeth chose Kings College in the U.K. for her studies.

“I would sit in my lectures sketching things,” she recalled. “Everyone was taking serious notes and I wasn’t.”

Refusing to give up on her vision, Lambeth relentlessly focused on getting her fashion fix by interning with high-end clothing brands instead of law firms.

“I wanted to get a glimpse of all sides of the fashion industry so I could broaden my understanding and learn how each role is different,” Lambeth recalled. “I assumed that if I knew a little about each different area, I would have enough of an understanding to start my own company.”

Within fashion, her internships included public relations and marketing, designing, writing for a magazine, styling and general operations.

None of the internships were credited towards her degree and landing the positions outside of her field of study wasn’t easy.

“For one of the internships, I turned up at their offices with just my CV and when I was told I would have to come back another time, I just sat in reception and waited until someone would see me,” she said. “I got the internship the following afternoon.”

And because Lambeth was particularly obsessed with designing lingerie, she was determined to learn how to make the perfect bra.

“Because I haven’t studied design, I was self-taught, I used to pull apart bras to look at the under-workings and how could I make the straps more beautiful and how can I change the hook and eye and look at the cradle and that was a really big development process, it just came from me sort of tearing up bras.”

She also spent time looking for the best suppliers of various bra components and would challenge them by asking what they could do to make each piece more comfortable and longer lasting.

Lambeth also did extensive research on sizing and spoke to women about their own experiences with ill fitting bras.

“It was a lengthy process but one that I really feel helps to set Luna Mae apart.”

It took Lambeth two years of working non-stop through law school to perfect her vision.

During that time, she was researching the lingerie industry and trying to understand what a customer’s journey was like when buying bras.

“This is where I discovered the gap for a completely personalized service, which focused on making the woman feel celebrated and special and didn’t limit her to a standard bra size.”

She also spent time visiting expert tailors to understand how their business operated.

Incredibly, Lambeth was able to graduate with her law degree despite much of her time and focus being spent creating her brand, Luna Mae.

“Luckily, I had friends who took great notes on the actual lectures so I was still able to get through the degree!”

Lambeth graduated in 2012 and launched Luna Mae in the U.S. three years later.

Lambeth’s big break came after she visited Vogue Magazine in New York to introduce them to her new brand.

One of the journalists Lambeth met during that visit recommended Luna Mae to a colleague who could not find a lingerie designer to make a custom bustier for her wedding gown.

That recommendation landed Lambeth her first big client in the U.S.

Lambeth’s client then presented the custom bustier to Valentino, who built the rest of her wedding dress around Lambeth’s design.

That early success created buzz around Luna Mae that spread through word of mouth and over time developed into a booming business.

“It definitely took time for the word to spread, but I really believe when it does happen, it’s the best form of recommendation because it’s a woman sharing her first-hand experience and it instills a sense of trust.”

Lambeth’s advice to other would-be entrepreneurs considering a career change to follow their dreams is this:

“Fashion was my passion. You don’t need to be taught something you’re passionate about. You can teach yourself if you’ve got the drive there.”