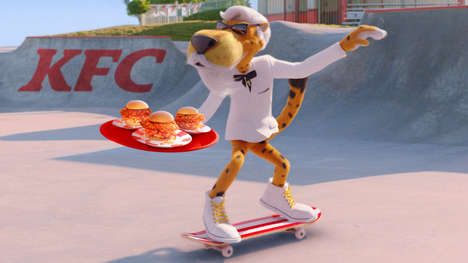 Chester Cheetah is the New Face of KFC, Taking on the Role of the Colonel

As of July, a new menu item will be available at KFC in the form of the Cheetos Sandwich and a new face of KFC is kicking off the launch.

For several years now, an ongoing campaign from KFC has invited different people to take on the role of Colonel Sanders. Just last year, the fast food chain introduced Reba McEntire as the first female to play Colonel Sanders. On Instagram, KFC also recently introduced its own CGI mascot. In keeping with its ever-surprising mascot rotation, KFC is now introducing yet another unexpected figure to play Colonel Sanders—Chester Cheetah. With Chester Cheetah, KFC is introducing “the first brand icon and spokescheetah to portray KFC’s famous founder.”