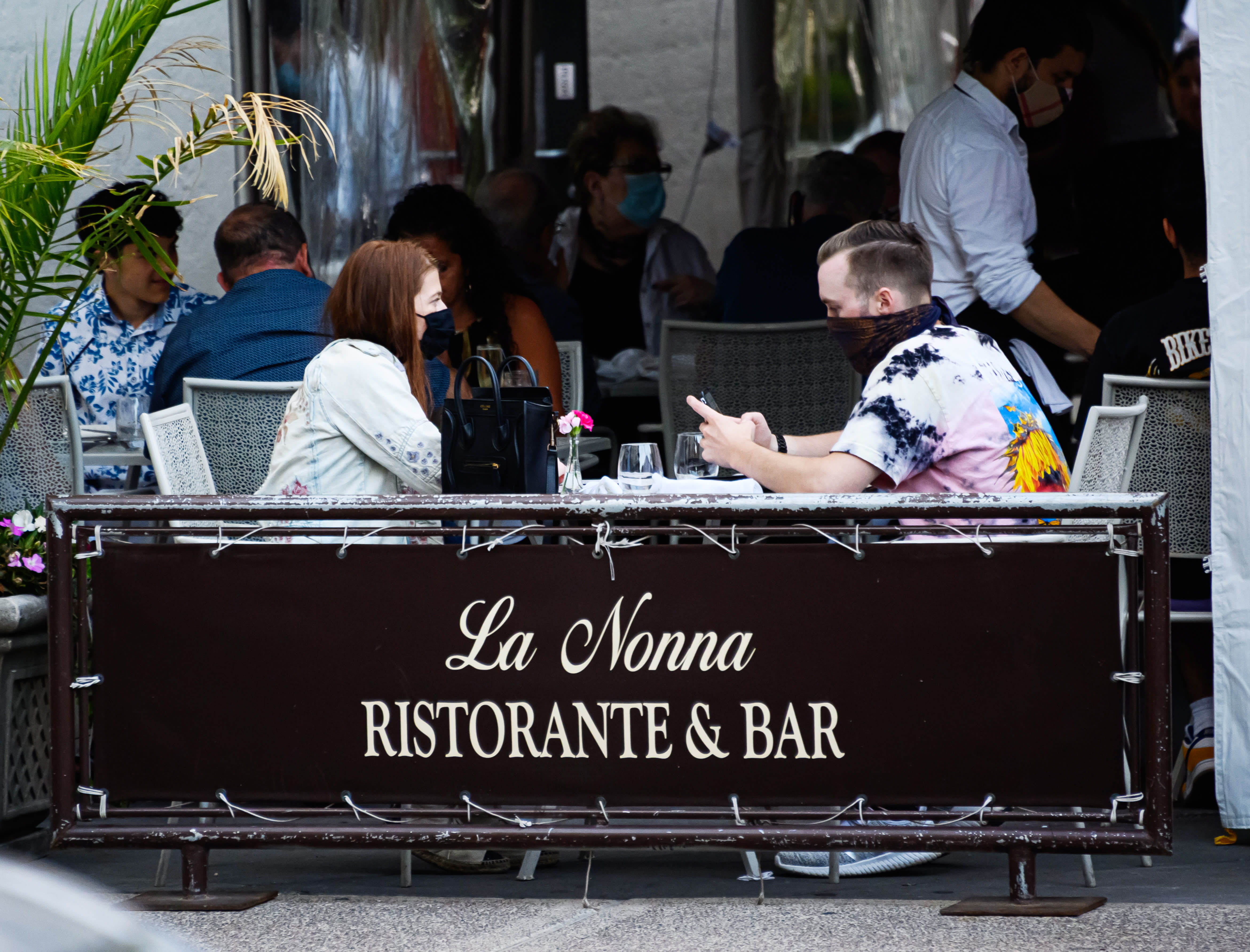 People wear protective face masks while sitting outside a restaurant in Brooklyn as New York City moves into Phase 3 of re-opening following restrictions imposed to curb the coronavirus pandemic on July 16, 2020.Noam Galai | Getty ImagesNew York City has been cleared to enter the next phase of reopening on Monday, but indoor restaurants, bars, museums and malls will remain closed, Gov. Andrew Cuomo said Friday.”I’m so proud of what New Yorkers have done. But we must continue to be on alert,” Cuomo said in a tweet.Phase four reopening will allow for more outdoor activities such as zoos, outdoor films and gardens, but indoor operations, such as eating in restaurants and shopping at malls, will remain closed, Cuomo said. New York City Mayor Bill de Blasio announced earlier in the day the city was set to enter phase four. Cuomo warned that there is still a risk of a second wave of the virus, urging residents to be vigilant. Cuomo said earlier in the week that he was tightening the rules as the state prepares for a second wave of coronavirus infections from states with surging outbreaks in the West and South.”There will be a second wave, I would wager on it,” he told reporters during a press briefing Friday afternoon. “You can’t have this spread across the country and think that you’re immune.””There’s no doubt this is a high stress, high difficulty period. Many people are suffering on many levels,” he added. The coronavirus outbreak has continued to worsen in the U.S. The nation reported a record 77,255 new cases of the coronavirus on Thursday, shattering its previous record single-day spike in new cases by nearly 10,000, according to data compiled by Johns Hopkins University. The virus has now infected more than 3.5 million Americans and killed at least 138,300, according to Hopkins data.Once the epicenter of the outbreak in the U.S., New York state now has one of the lowest levels of new cases in the country. New York state reported 776 new cases on Thursday, down from its peak of around 10,000 new cases a day in April, according to state data.Cuomo has been critical of the Trump administration’s response, describing the pandemic in the U.S. on Thursday as a “virus of American division and federal incompetence.””It will be a double-barreled shotgun of incompetence,” he said. “You know what virus is worse than Covid? The virus of American division and federal incompetence. That’s the virus that’s wreaking havoc on this country.””They failed. They failed. And the virus came to New York and Americans died because of government failure,” Cuomo added. “They are still failing, and they are still not following the science.”Cuomo said Friday not opening the economy correctly helped “no one.””Not opening the economy correctly, opening and closing again. It helped no one. It cost lives” and jobs, Cuomo said.