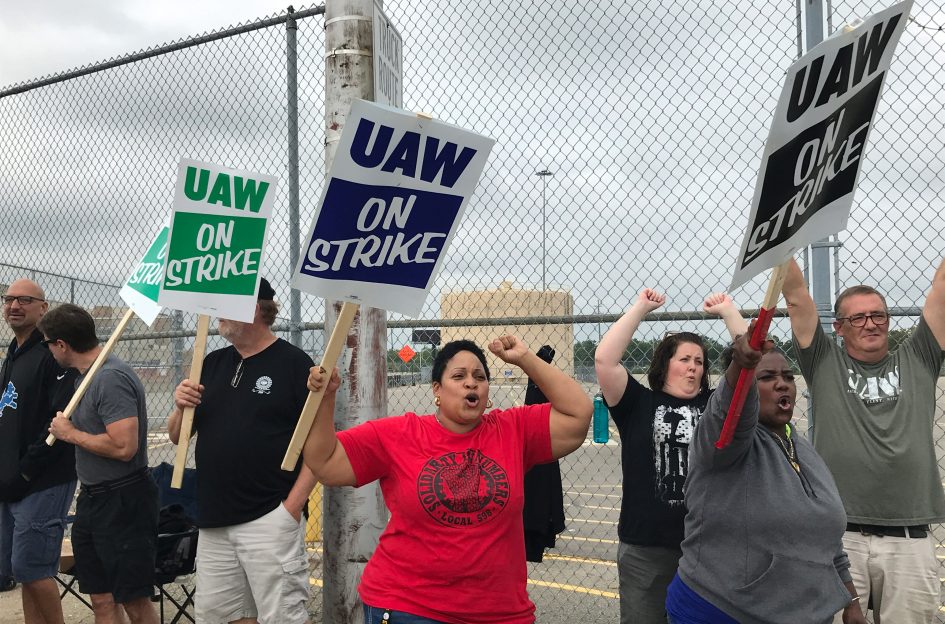 DETROIT — The music and chants from outside a General Motors assembly plant at midnight Monday could be heard from several blocks away as United Auto Workers members picketed the plant.”No contract, no cars!” chanted dozens of workers outside GM’s Detroit-Hamtramck Assembly, on the outskirts of the city. Others yelled, “No more tiers,” in reference to the current pay structure of UAW workers that includes an eight-year grow-in period to reach top hourly pay levels.Several union members walking the picket line say they just want a “fair deal” from the automaker. Some said that includes better pay amid the company’s record profits. Others said it’s about keeping Detroit-Hamtramck and three other U.S. plants for GM, including Lordstown Assembly in Ohio, open after the automaker announced plans last year to potentially shutter the facilities.”I think it’s time,” said Patty Thomas, a GM worker at the Detroit plant who has worked for the automaker for 19 years. “They’re trying to take away from the workers here. We don’t even get cost-of-living anymore.”‘Fair deal’Thomas, 63, was part of the last strike against GM in 2007. She said this year’s strike for a “fair deal” is far more important than the last: “The other one was just a political move, I think,” she said in an interview. “This one looks serious. We’ve got to stand together.”GM shares were down nearly 3% Monday as analysts estimated the strike could cost GM tens of millions of dollars per day. The two sides resumed talks at 10 a.m. Monday after failing to reach a deal before the current contracts expired Saturday night.”From a bottom line standpoint, the impact could potentially be nominal if the strike is resolved quickly; yet, the longer it lasts, the more it will be felt in GM’s earnings profile,” wrote Credit Suisse’s Dan Levy in a note Monday, estimating the impact of the strike at roughly $50 million per day. Analysts at Bank of America estimated in a research note the cost of the strike at up to $90 million a day.UAW Vice President Terry Dittes, standing with the union’s bargaining team, announces a strike against General Motors during a press conference Sept. 15 in Detroit. The strike will take effect at 11:59 p.m.Michael Wayland/CNBCOne UAW member with GM who did not want to be identified for fear of retaliation said “it’s a shame” what the automaker has done to Detroit-Hamtramck, including displacing workers and having them move to other plants.”This is supposed to be the crown jewel,” he said. “It’s the only GM plant in Detroit. You can’t call it the Motor City and not have a plant here.”‘Solidarity’Many people picketing outside the Detroit-Hamtramck plant weren’t GM workers but fellow union members from nearby Fiat Chrysler plants. They came out to support the roughly 48,000 members with GM who went on strike effective 11:59 p.m. Sunday. The UAW is negotiating contracts with all three Detroit automakers, GM, Ford and Fiat Chrysler, on behalf of 158,000 members. It’s striking against GM because it’s the lead negotiator, meaning whatever agreement it reaches will set the tone for talks with the other two automakers.”We have several locals, several unions, several plants out here,” UAW Local 1700 President Louie Pahl yelled to the crowd shortly after midnight. “One solidarity. One union. We want a good contract. Let’s walk these lines.”UAW members on strike outside a GM plant in Flint Michigan on Sept. 16th, 2019.Michael Wayland | CNBCPahl, who represents workers at a nearby truck plant for Fiat Chrysler, said his members wanted to show their support for the GM workers because they could be next on strike, depending on how talks go with the Italian-American automaker.”We’re not going anywhere,” he said. “We’re going to come support this local and other locals throughout GM. We hope that they get back together but we also want a fair deal for both sides.”Other parts of a “fair deal,” according to GM workers, include retaining their health-care coverage and getting more financial benefits following the company reporting record profits in recent years.Solutions?The strike comes despite GM saying it presented a “strong offer” to the union that included the addition or retention of thousands of jobs and more than $7 billion in new investments over the next four years.GM on Sunday said there are “solutions” under a proposed deal to the union to keep the Ohio facility and another assembly plant in Michigan that are potentially slated for closure operating. The company declined to provide further details about the deal.A person familiar with the proposed deal told CNBC the “solutions” for the plants included production of a new all-electric pickup at the Detroit-Hamtramck plant in Michigan and battery cell manufacturing for workers in Ohio — that’s in addition to an announced deal to sell Lordstown Assembly to an affiliate with all-electric vehicle company Workhorse.President Donald Trump on Sunday urged the UAW and GM to “get together and make a deal!”