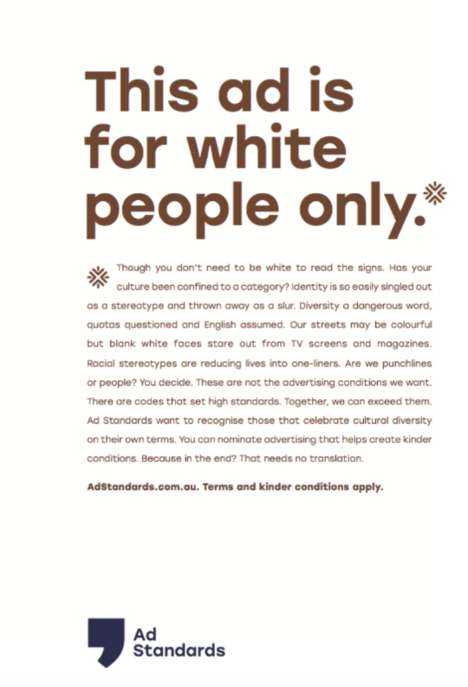 Ad Standards — an independent advertising complaints adjudicator in the UK — recently launched the new, thought-provoking campaign ‘Kinder Conditions’ to bring to light issues with racism and sexism in the marketing industry. The organization worked with the creative industry Loud Communications to launch a multi-media campaign that will run across television, radio, newspapers, and billboards.

Kinder Conditions highlights the issues with the lack of diversity in advertising, the racial stereotype often being portrayed on screen, and the unrealistic portrayal of women seen in ads. This is accomplished through videos and posters that have provocative titles such as “This ad is for white people only” and “If you’re a woman, don’t bother reading this.”

The campaign seeks to set high advertising standards that “dismantle gender stereotypes” and “celebrate cultural diversity.” The campaign encourages the public to nominate advertisements that meet these high standards and create “kinder conditions.”