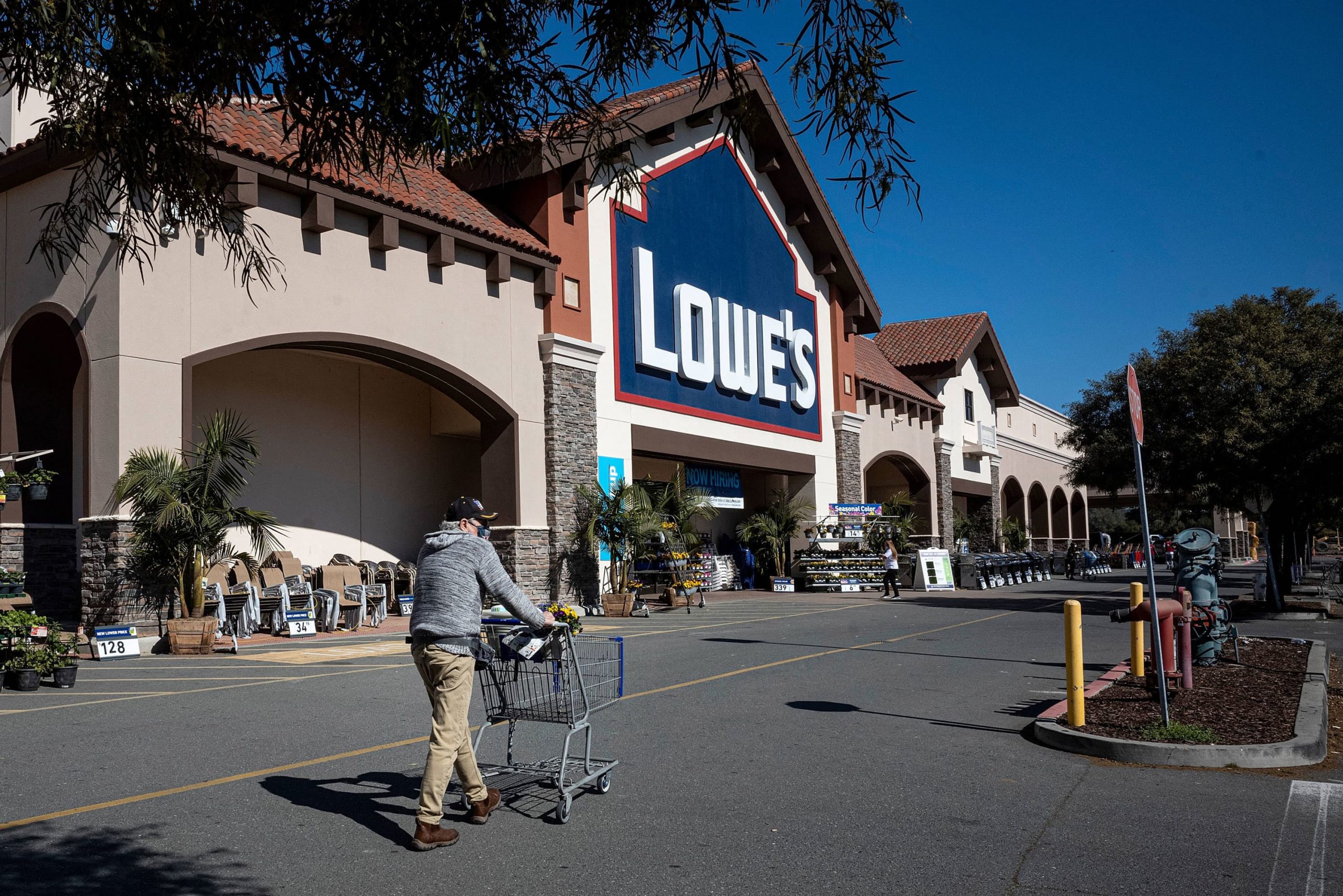 A customer pushes a shopping cart towards the entrance of a Lowe’s store in Concord, California, on Tuesday, Feb. 23, 2021.David Paul Morris | Bloomberg | Getty ImagesLowe’s said Wednesday that fiscal first-quarter sales rose 24%, outpacing Wall Street expectations, as consumers continued to invest in their homes and sales picked up among home professionals, such as contractors.The home improvement retailer said momentum continued into May. Based on these trends, it said it’s tracking ahead of its prior sales forecast of $86 billion this fiscal year.Despite its strong quarter, shares fell 2.4% in premarket trading as investors worried that the housing market faces challenges including a labor shortage and rising lumber prices.Here’s what the company reported for the fiscal first quarter ended April 30 compared with what Wall Street was expecting, based on a survey of analysts by Refinitiv:Earnings per share: $3.21 vs. $2.62 expectedRevenue: $24.42 billion vs. $23.86 billion expectedLowe’s reported first-quarter net income of $2.33 billion, or $3.21 per share, up from $1.34 billion, or $1.76 per share, a year earlier. The results outpaced the $2.62 per share expected by analysts surveyed by Refinitiv.Net sales rose to $24.42 billion from $19.68 billion last year, higher than analysts’ expectations of $23.86 billion. Lowe’s same-store sales grew by 25.9% in the quarter.At rival Home Depot, sales soared by nearly 33% in the first quarter, but the retailer declined to provide a forecast. Its shares fell about 1% in Wednesday’s premarket.Both home improvement players have benefited from the booming housing market but also face challenges. The real estate market remains hot, but a labor crunch, rising lumber prices and land shortage is making it difficult for construction to keep up. Home construction of single-family housing dropped more than 13% in April compared with March, the U.S. Census reported Tuesday. That’s the sharpest decline since April 2020, when the pandemic shut down the economy.Lowe’s is also going up against big numbers in the fiscal year. It kept stores open during lockdowns last year as an essential retailer. As customers stayed at home, they took on do-it-yourself projects, replaced kitchen appliances and spruced up their lawns or backyards. Some investors are skeptical that will continue as people dine out, go on vacation and spend their time in other ways.As of Tuesday’s close, Lowe’s shares have risen about 20% this year. Its shares closed at $192.75 on Tuesday, bringing its market value to $138.24 billion.Read the full press release here.