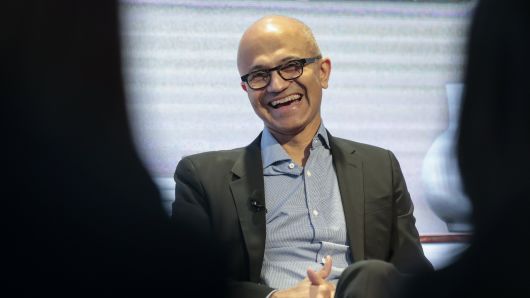 Microsoft CEO Satya Nadella reacts during a panel session on day three of the World Economic Forum in Davos, Switzerland, on Jan. 24, 2019.

Microsoft shares jumped as much as 5.1% on Thursday, pushing the company past $1 trillion in market value on a better-than-expected earnings report.

The stock needed to hit $130.51 to reach the trillion-dollar mark for the first time. It traded as high as $131.31, though it was bouncing around throughout the morning.

After the market closed on Wednesday, Microsoft reported fiscal third-quarter earnings of $1.14 per share, excluding certain items, topping the $1.00 estimate of analysts surveyed by Refinitiv. Revenue climbed 14 percent to $30.6 billion, exceeding the average estimate of $29.84 billion.

Sales growth is being driven by Microsoft’s transition to the public cloud as more large businesses offload their servers and data storage to Azure infrastructure. Gross margin, or the percentage of revenue left after accounting for the costs of goods sold, was 66.7%, up from 65.4% a year earlier. Net income rose 19% to $8.8 billion.

Azure’s revenue surged 73%. Microsoft’s commercial cloud business, which includes Azure, grew 41% in the quarter to $9.6 billion. While Azure is still much smaller than rival Amazon Web Service, Stifel analysts say it’s growing faster than AWS was at a similar size.

Tesla is going to have to raise $2.5 billion in capital
Chipotle’s stock drops 6% after disclosing subpoena related to 2018 illness incident
To Top
error: Content is protected !!
Top