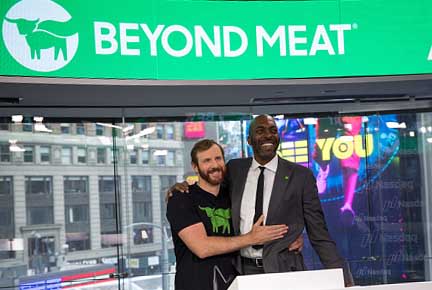 NBA champion John Salley isn’t planning on cashing out of his investment in Beyond Meat anytime soon.

Shares of the El Segundo, California-based company surged 163% after going public Thursday. Salley, a vegan, is an original investor in Beyond Meat, which makes plant-based meat substitutes and was founded in 2009. Its products include fake burger patties, ground beef and sausage made with proteins from peas and faba beans.

He invested $5,000 with Beyond Meat and plans on letting his investment “ride.”

“It is first. There are going to be other plant-based companies that come along here,” he said on CNBC’s “Fast Money: Halftime Report. “

“I think this one, I should just let it sit for as long as I can possibly let it go.”

Ethan Brown, founder and chief executive officer of Beyond Meat Inc., left, and John Salley, a former professional basketball player with the National Basketball Association’s (NBA) Los Angeles Lakers, stand for a photograph during Beyond Meat’s initial public offering (IPO) at the Nasdaq MarketSite in New York, U.S., on Thursday, May 2, 2019.

Salley played with the Detroit Pistons, Miami Heat, Toronto Raptors, Chicago Bulls and LA Lakers, and is a four-time NBA champion. He retired from the game in 2000 and is now an entrepreneur and an advocate for wellness.

“If you enjoy looking up and seeing blue skies, we need to take care of the planet,” he said. “One of the ways is not eating any farm animals, or any animals anyway.”

He thinks more and more people will turn to the vegan lifestyle, which in turn will help companies like Beyond Meat.

Beyond Meat priced its initial public offering on Wednesday night at $25 per share, for an implied market value of $1.46 billion. Shares closed at $65.75 on Thursday.

Weight Watchers International Q1 2019 earnings
Bankers like Sloan are ‘pinatas’ because of ‘poison in Washington’
To Top
error: Content is protected !!
Top