One Health uses precision medicine to treat dogs with cancer 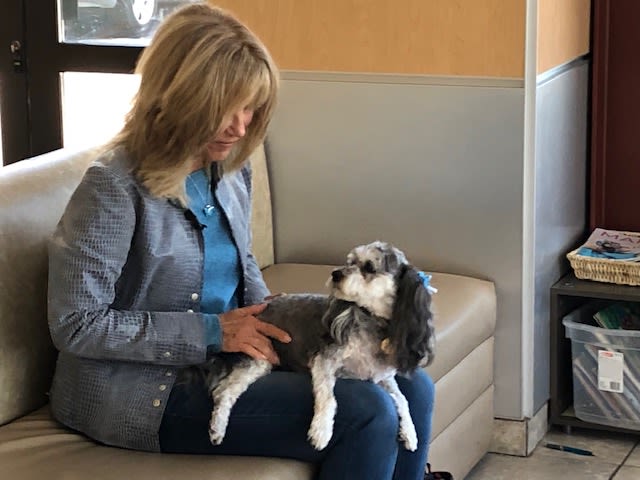 The 11-year-old Maltipoo has a history of knee problems, so it was something of a surprise when the diagnosis turned out to be cancer.

“I was heartbroken,” said Guptill, who adopted Lulu when the dog was 8 weeks old. “She’s just like a member of the family.”

Lulu’s diagnosis is not unusual. One in three dogs will get cancer, according to the National Canine Cancer Foundation. And it’s often diagnosed late.

“An animal, they have that survival instinct. It’s survival of the fittest. So they’re going to hide their clinical signs or that something’s wrong with them until they can’t,” explained veterinary oncologist Dr. Aarti Sabhlok. “So, typically we find disease much later in animals than we do in people. For that reason, disease is often more advanced and so that’s why it’s harder to treat.”

Much like people, dogs with cancer are treated with some combination of surgery, chemotherapy and radiation. But unlike for humans, there is only one targeted cancer therapy available for dogs: Palladia, made by Zoetis.

The market for pet cancer therapeutics is growing at 10.8% annually, and will increase from $178 million in 2018 to $300 million by 2024, according to Global Market Insights.

One Health, a Silicon Valley start-up, wants to change the approach to treating canine cancer using precision medicine. It is looking to make it easier for pet owners to use targeted therapies to treat their dogs’ cancer.

Lulu had myxosarcoma, a particularly aggressive form of cancer.

“Lulu’s biopsy showed that her tumor was high-grade, so the cells were rapidly dividing,” said Dr. Sabhlok. “That increases the risk that those cells are going to spread.”

Lulu’s left hind leg had to be amputated. But Lulu’s treatment was just getting started.

“Most of our treatments are based on clinical trials or studies. Some of these studies are really old, some of these are more recent, but overall they’re just studies and there’s like this percentage of dogs that will respond to treatment,” said Dr. Sabhlok. “I used to go to my clients and say, here’s your cancer, here’s the treatments that are available. And this is the likelihood that they’re going to respond to this treatment.”

Then, in January 2018, Dr. Sabhlok was approached by One Health.

The company offers genetic sequencing of a dog’s tumor through its proprietary FidoCure product. It uses the same tissue from the biopsy used to diagnose the cancer, so there’s no additional procedure for the dog to endure. One Health then recommends a unique course of treatment for each dog, using targeted therapies that are approved for humans. While using these drugs on dogs isn’t unusual, in fact many are tested on dogs, choosing which ones to use by mapping the cancer’s mutations is novel when it comes to canines.

“We come from the principle, the scientific principle, that every cancer is unique,” said One Health founder and CEO Christina Lopes. “So, while some therapies might work for some populations, I don’t know of any that work for all, really. Any. In any species.”

Lopes said, “There is a spirit of the intention of it being a bit safer, gentler and more efficacious. Of course, it’s still cancer therapy, not Advil.”

One Health generates a detailed report with those recommendations for the veterinarian. It’s currently recommending 14 different drugs and studying more, although Lopes won’t disclose which ones. The company works with pharmacies to help get the drugs to the dogs.

Lulu’s vet is using precision medicine to treat her myxosarcoma.

“They use gene mapping, they give me the receptors and the drugs that are gonna work against those receptors and I’m now able to come to my clients and say: ‘Your dog’s tumor, these are the drugs that are going to be effective.’ Sometimes they’re the drugs I would normally have used, but it narrows it down a little bit and gives me additional options and sometimes they’re drugs I wouldn’t have thought to use for that particular patient or that particular cancer,” said Dr. Sabhlok.

She’s used FidoCure for eight patients, including Lulu, in the past 12 months and became an advisor, with stock in the company, in December.

Kathy Guptill jumped at the chance to use the new technology.

“If she did not have the gene mapping, then it would have been, um, okay, we’ve got all these different chemos that we can try, let’s try this one. And who knows whether or not that one would have worked,” Guptill said. “Who wants to, you know, run her through the mill of different types of chemotherapy that aren’t gonna work, when she could find out, definitely what kills this type of a sarcoma. So to me it’s like a win-win all the way around.”

In fact, Dr. Sabhlok said the FidoCure results prompted her to use a different protocol than she otherwise would have, after the gene mapping showed one of the drugs would not have worked on Lulu’s cancer.

One Health has raised $5 million in seed funding from prominent investors including Andreessen Horowitz and Y Combinator.

The company is working with 35 veterinarians in 11 states, including California, Washington, Colorado, Florida, Illinois and New York, and is looking to bring that total to 200. Those doctors have used FidoCure for 116 dogs in the past 14 months, with more than 50 in just the last three months. One Health is expecting to have mapped 1,000 canine cancers within the next year. Eventually, Lopes hopes FidoCure will “be an option discussed at every single [canine] cancer case in America.”

One Health says it’s too soon to publish data, but says many of its clients are living longer than would be expected using traditional treatment. Of the first 80 dogs that used FidoCure, almost half had failed other treatments and were considered terminal, Lopes said. Twenty-four of those 38 dogs (63%) are still alive today, having been treated between two and 13 months ago.

One Health charges the vet an undisclosed price for FidoCure, and the vet chooses what to charge the patient. Many people are willing to shell out big bucks to try to save their pets. The global veterinary care market is expected to grow from $16 billion in 2015 to $25 billion by 2025, according to Statista, with current double-digit growth for major players in the sector, including Merck, Elanco and Zoetis.

“We can do that because the costs have gone down. When the genome was first sequenced for humans, it was $2.8 billion, you know, so we can do it now and it’s not gonna break the piggy bank,” she said.

Insurance is covering Lulu’s treatment. Three months in, she’s in remission. And while Dr. Sabhlok says it’s too soon to say how effective FidoCure will be for Lulu long term, Guptill is happy with her progress.

“For any other member of your family, you wouldn’t say ‘should we just let her not have it?’ She enriches our lives and I’m sure this enriches her life, too, because it’s healthier. She’s a happy little dog.”