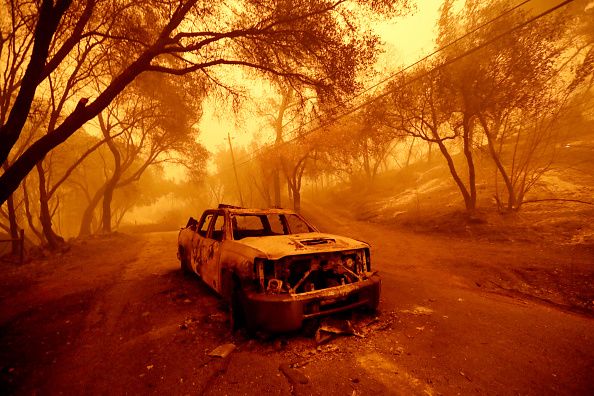 A charred vehicle was left in the middle of Honey Run Road as the Camp Fire continues with zero containment in Paradise, Calif., on Friday, Nov. 9, 2018.

Shares of embattled utility PG&E plummeted Monday after a judge ruled that a jury can decided whether the company should pay up to $18 billion in damages to wildfire victims.

The California supplier of gas and electricity fell to $10.05 — about 30% — on the week’s first day of trading before paring one-day losses to about 25%. The plunge represented its worst day on Wall Street since PG&E first announced plans to file for bankruptcy in January.

U.S. Bankruptcy Judge Dennis Montali on Friday said that a court trial can decide if PG&E is responsible for the 2017 Tubbs Fire, which killed 22 people and destroyed more than 5,600 buildings.

That fire, the second most destructive in the state’s history, preceded the 2018 Camp Fire, which became California’s worst. PG&E is also facing responsibility for that blaze.

“Regardless of the next legal steps, Cal Fire has already determined that the cause of the 2017 Tubbs Fire was not related to PG&E equipment,” PG&E said in an emailed statement. “PG&E has made significant progress in further refining a viable, fair, and comprehensive plan of reorganization that will compensate wildfire victims, protect customer rates, and put PG&E on a path to be the energy company our customers need and deserve.”

Still, Montali’s decision was enough to spark investor concerns across Wall Street, with analysts like Citi’s Praful Mehta categorizing the development as “too risky.”

“Even though Calfire had clearly noted that PG&E equipment wasn’t involved in starting the Tubbs fire, we think that a jury trial brings a lot of other dynamics in play, especially given PG&E’s history of poor safety and operational culture,” the analyst wrote Monday, downgrading the stock to a sell rating.

The decision marks a critical development for PG&E, which earlier this year was thought to be absolved of responsibility for the Tubbs Fire when California investigators concluded that the blaze was the result of a private electrical system. The company did, however, manage to retain control of its multibillion-dollar bankruptcy plan, a win for the company in the face of growing investor angst.

PG&E filed for Chapter 11 in January, facing up to $30 billion in potential wildfire liabilities.

“This risk of a significant liability for Tubbs is now very real and adds a lot of uncertainty to the PCG story,” Mehta added. The analyst believes the company is worth $4 per share, less than half its current value.