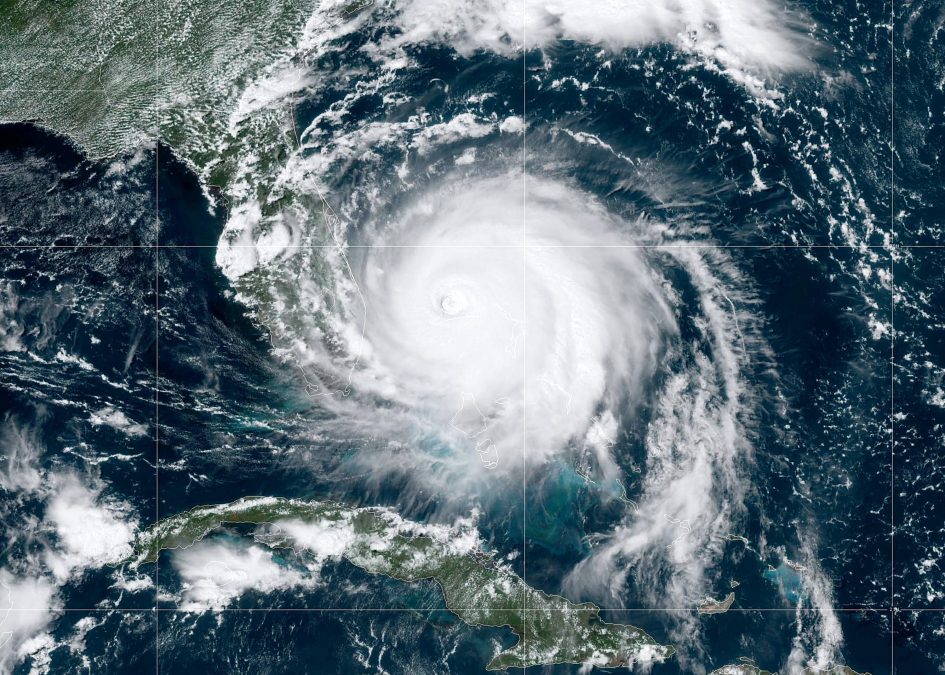 Delray Beach police officer, Matt Warne, informs a driver that the road to the beach is only open to residents as Hurricane Dorian continues to make its way toward the Florida coast on September 02, 2019 in Delray Beach, Florida.

The slow-moving hurricane Dorian, one of the most powerful Atlantic hurricanes on record, pounded Grand Bahama Island on Tuesday and was forecast to come “dangerously close” to Florida’s coast by the day’s end.

Dorian has been pounding the Bahamas for days, killing at least five people in the Abaco Islands in the northern Bahamas and inundating homes with floodwater ahead of its expected advance on the U.S. coast, where more than a million people have been ordered evacuated.

But the hurricane weakened to a Category 3 on the five-step Saffir-Simpson Wind Scale early on Tuesday, with maximum sustained winds of 120 miles per hour (195 kph), the U.S. National Hurricane Center said. It was moving northwest at 1 mile per hour (1.6 kph), well below walking speed.

The exact toll of the devastation in the Bahamas will not be clear until the storm passes and rescue crews can get on the ground.

“We are in the midst of a historic tragedy in parts of our northern Bahamas,” Bahamian Prime Minister Hubert Minnis told a news conference on Monday. “Our mission and focus now is search, rescue and recovery.”

He added that the U.S. Coast Guard was on the ground in Abaco and had rescued a number of injured individuals. Critically injured people were being taken to hospitals on New Providence, the country’s most populous island.

As many as 13,000 homes in the Bahamas may have been destroyed or severely damaged, the International Federation of Red Cross and Red Crescent Societies said.

Houses in a neighborhood in Freeport on Grand Bahama Island were engulfed by 6 feet (1.8 m) of water. “It looks like they’re boats on top of the water,” said Rosa Knowles-Bain, 61, a resident who fled two days ago to an emergency shelter.

Dorian was expected to churn towards Florida by the day’s end, before bringing its powerful winds and dangerous surf along the coasts of Georgia, South Carolina and North Carolina by late Thursday.

Forecasters have told Floridians not to become complacent, as the storm is now predicted to stay off the coast.

“It’s not that far off shore,” said Robbie Berg, a forecaster and hurricane specialist with the NHC.

“All it has to do is jog a little bit west and you have a full-on hurricane rolling through Florida,” he said. “No one is out of the woods.”

Nine counties in Florida have issued mandatory evacuations. They included parts of Duval County, home to Jacksonville, one of Florida’s two biggest cities, and some areas in Palm Beach County, home to Trump’s Mar-a-Lago resort.

Among those being evacuated was Sue Watson, a 93-year-old resident of a retirement community in Kissimmee in central Florida.

“I was all set to stay home until they had to turn the water off,” said Watson, who added she was not worried for her personal safety but hoped the storm spared the retirement community.

The storm was causing havoc for travelers on Florida’s east coast, where some airports and gasoline stations were closed.

Orlando International Airport, one of the largest in the state, planned to cease commercial operations at 2 a.m. on Tuesday because of the storm, it said in a statement.

Walt Disney World Resort in Orlando will close early on Tuesday, it said in a statement.

South Carolina Governor Henry McMaster ordered mandatory evacuations for parts of eight coastal counties effective at noon on Monday. More than 830,000 people were under evacuation orders in Charleston and other coastal communities in the state, emergency management officials announced.

Virginia Governor Ralph Northam declared a state of emergency in his state on Monday, his office said, anticipating the southeast coast could be hit by the storm on Thursday.