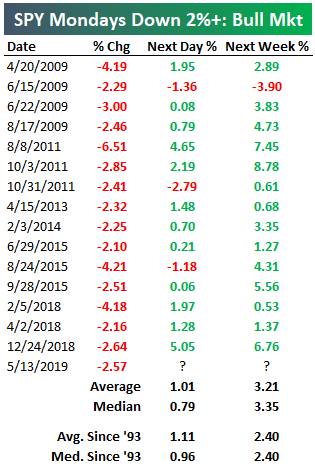 It was hard to find a bright side on Monday, where the Dow lost more than 600 points.

But there may be some relief coming if recent history is to be believed. In all but one case during the decade-long bull market, data shows that the S&P 500 bounces back from heavy Monday losses to end the week positive.

“Since the bull market began in March 2009, there have been 15 prior Mondays where [the S&P 500] declined by 2% or more,” Bespoke Investment co-founder Justin Walters said in a note.

Beyond the fact that stock market indexes generally go up over the long term, it’s not clear whether there is a fundamental reason to explain this phenomenon. It may well be a coincidence that bad Mondays are a strong indicator of a positive week. But the pattern generally holds as far back as 1993, according to Bespoke’s data.

“So whether you’re looking at just the current bull market or over a longer period of more than 25 years, the day and week after a big Monday decline have usually been very positive,” Walters said.

Our family business, like others, pays Trump’s tariffs, not China
Why is Apple so vulnerable to a trade war with China?
To Top
error: Content is protected !!
Top