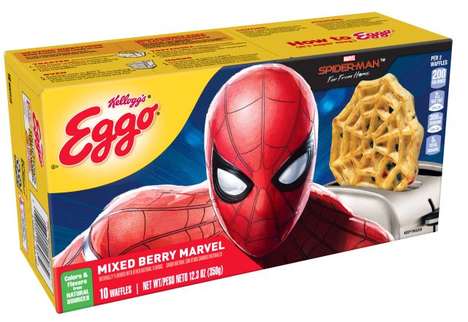 The Kellogg’s Spider-Man Eggo Waffles have been unveiled as a new product through a partnership with Sony Pictures Entertainment that celebrates the upcoming release of Spider-Man: Far From Home.

Shaped to look like spiderwebs, the waffles are a playful breakfast food that come in a Mixed Berry Marvel flavor to offer an additional punch of flavor for consumers of all ages to enjoy. The waffles have been announced alongside other products including the Spidey Berry Pop-Tarts, themed Cheez-It snacks, Keebler Amazing Vanilla Cupcake Fudge Stripe cookies and more.

The new partnership between the two brands is also seeing the Kellogg’s New York City Cafe offer up limited-time indulgences like the Peter Parker CB & Jelly, Spidey Surprise and Mysterio Mac and Cheese.