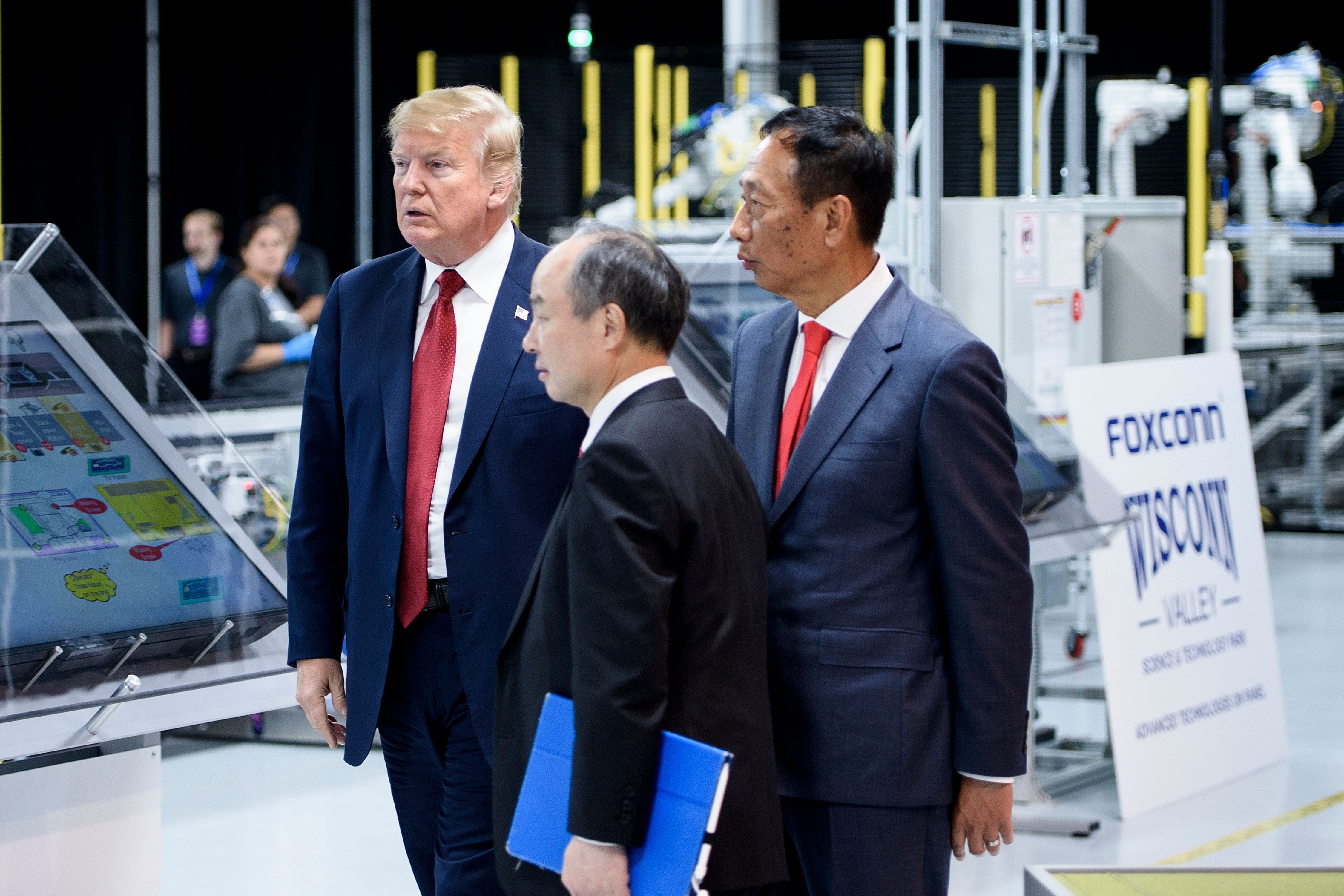 The giant Foxconn manufacturing complex planned in Wisconsin is likely to continue falling short of the threshold required to begin receiving billions of dollars in state incentives, even after production begins next year. That is according to Gov. Tony Evers, who says his administration has now gotten “clarity” from the Taiwanese electronics manufacturer on its plans — which are much less ambitious than they were originally portrayed.

“We understand what is going to be built and when it’s going to be finished — the first phase,” the governor said.

Evers spoke exclusively with CNBC in his State Capitol office in Madison on June 27, one week after paying his first visit to the construction site near Racine. The site visit was undisclosed to the public until now.

Under the deal negotiated by Evers’ predecessor, Gov. Scott Walker, Foxconn said it would build a $10 billion manufacturing complex that President Donald Trump called “the eighth wonder of the world” at a groundbreaking one year ago.

Since then, no factory has been built, but the state and local governments already have spent tens of millions of dollars on land acquisition and road and utility improvements. The company only recently began laying the foundation for a vastly scaled-down manufacturing plant, more than a year behind schedule.

“In fact, I saw them pouring concrete the other day,” Evers said.

But the governor said the project’s initial phase will employ only about 1,500 people when production begins, which is currently scheduled for next May. That would be well short of the company’s previously announced plans to hire more than 1,800 people by the end of next year.

The company already has acknowledged that it no longer plans to produce giant glass panels for video displays at the plant, using so-called Generation 10.5 technology for which there are no facilities in the U.S. Instead, Foxconn will build a Generation 6 plant.

“They’re going to be making smaller items, probably tablets, glass for tablets and phones and things like that. Not the big TVs that they talked about initially,” Evers said.

Foxconn attributed the change to market forces. In addition, the larger displays would have required an advanced glass plant to be built nearby. The leading glass manufacturer, New York-based Corning, said it was unwilling to locate a new plant in Wisconsin without subsidies, but the state was already tapped out.

The payments are part of a controversial package totaling more than $4 billion in incentives and other assistance the state agreed to in 2017, believed to be the largest such package ever offered to a foreign company in the U.S.

The company’s point person in Wisconsin told CNBC that its long-term goals for the project are unchanged.

“I talked to our corporate [team], and they have reiterated that we are committed to 13,000 jobs,” said Peter Buck, executive director of the Wisconsin Valley Science and Technology Park, which is what the company and the state have named the development.

More from America’s Top States for Business:
A scorecard on the governors that want to beat Trump in the 2020 presidential election
How the trade war with China could crush California’s $2.7 trillion economy and hurt other states
Colorado passes $1 billion in marijuana state revenue

The company already missed last year’s target of 260 employees. It hired only 156, which meant it forfeited $10 million in credits last year. The company has not said whether it will meet this year’s minimum of 520 employees to collect as much as $222 million. In 2020 the contract requires the company to create at least 1,820 jobs by year’s end in order to receive up to $270 million more in credits.

The disconnect between Foxconn’s initial promises and reality has been deeply controversial in Wisconsin and likely helped Evers, a Democrat, defeat Walker, a Republican, in last November’s election. As recently as April, Evers said the original deal with Foxconn was “no longer in play” and that his administration was renegotiating it at the company’s request.

Foxconn CEO Terry Gou and former Wisconsin Gov. Scott Walker talk before the groundbreaking of the 1,000-acre Foxconn Technology Group liquid-crystal display panel factory on June 28, 2018, in Mount Pleasant, Wisconsin. Under the deal negotiated by Walker, Foxconn said it would build a $10 billion manufacturing complex that President Donald Trump called “the eighth wonder of the world.”

The comments set off a flurry of activity, with Trump intervening and Foxconn’s then-chairman, Terry Gou, traveling to the White House and to Wisconsin on May 1 and 2 to smooth things over. Gou has since stepped down from the company to run for president of Taiwan in the January 2020 election.

In the interview with CNBC — Evers’ first public comments about the project since Gou’s visit — he said specifics of the contract were still under discussion, but the clarity he has received has made it more of an ongoing dialogue rather than a one-time renegotiation.

“That clarity is important to me. That transparency and accountability and protecting the taxpayers has always been a top priority,” Evers said.

His administration has hired a consultant with industry expertise to monitor the project and is in “constant conversation” with the company, Evers said.

“The natural outgrowth of that has been: ‘Let’s have some conversations around the quote-unquote deal, because it’s not going to be what that deal was set up on; it’s going to be something different,'” Evers said.

Backers of the deal, including WEDC Secretary and CEO Mark Hogan — a Walker appointee who has announced plans to step down later this year — say the experience thus far proves that the contract is functioning the way it was designed and is protecting the taxpayers.

“The contract works. They didn’t create the jobs. It’s a performance-based contract. They don’t get the tax credits. They understand that,” Hogan told CNBC.

But that does not address the taxpayer money that already has been spent on the project or the upheaval it has created on what was thousands of acres of rolling farmland 30 miles south of Milwaukee. Under the agreement, Racine County and the Village of Mount Pleasant — where the facility will be located — are on the hook for as much as $764 million whether Foxconn meets its hiring targets or not. As of the beginning of this year, nearly $200 million of that already had been paid out, mostly for land acquisition.

While Foxconn’s factory has yet to rise on the site, the area was still a beehive of activity when CNBC visited in June. Nearby Interstate 94 was a giant construction zone — it is being widened to eight lanes from six, a requirement from Foxconn when it was still planning a Generation 10.5 plant. Off the freeway, crews were building new roads, laying utility and drainage lines and moving tons of dirt. Orange construction signs pointed the way for “Wisconn Valley Trucks.”

Sitting in the middle of it all, completely out of place, is the home of Kim and Jim Mahoney. In 2018 they rejected an undisclosed offer from the Village of Mount Pleasant to buy their home, saying the price was too low. Under the Foxconn deal, it was up to the village to acquire all the land.

Kim and Jim Mahoney’s house in the shadow of Foxconn’s factory site in Mount Pleasant, WI, is the last one standing in what used to be a neighborhood of about a dozen homes.

“They low-balled their appraisal and made us an offer based on that,” Kim Mahoney told CNBC. “We spent 10 years planning to build this house in this beautiful location, and we shouldn’t have to settle for less.”

But a dozen neighbors decided to accept the village’s offers. Those homes have been demolished, leaving the Mahoneys’ house the last one standing. They say they are still willing to sell for the right price, but the company and the village appear to have moved on.

Kim Mahoney said the process — which essentially had the village acting as Foxconn’s real estate agent — was unfair to local residents.

“They didn’t tell us anything. The homeowners didn’t know that we would be directly impacted until the day of the public announcement,” she said.

The impact extends beyond the neighborhood. The Village of Mount Pleasant and Racine County both saw their credit ratings downgraded as a result of the money they are spending on the project.

The contract works. They didn’t create the jobs. It’s a performance-based contract. They don’t get the tax credits. They understand that.

In its Aug. 30 report downgrading Mount Pleasant’s bond rating to Aa3 from Aa2, Moody’s Investors Service said the move “largely reflects current and anticipated growth in the village’s direct debt burden and likely growth in its overlapping debt burden tied to borrowing in support of the Foxconn development.”

Village officials did not respond to CNBC’s request for comment, but Racine County Executive Jonathan Delagrave said the upfront costs are well worth the benefits Foxconn will provide in terms of infrastructure, health care and jobs.

“I think it’s been a huge, huge benefit, and there’s certainly been a good return on our investment already,” Delagrave told CNBC.

The ultimate cost-benefit analysis, of course, depends on what Foxconn ultimately builds at the site and whether it hires the numbers of people it has promised. Evers acknowledges the company’s commitment to expand beyond 1,500 employees, but he will not speculate beyond that.

“Well, we will take one step at a time,” he said. “We’ve learned that making sure that things are concrete and discreet and transparent takes some time, and we’re going to continue to do that.”

“I think it was complete bait and switch,” she said. “I think things could change drastically once the 2020 election comes and goes.”

P&G looks to kid-safe bug spray in a quest to boost sales growth
Space tourism flights in a year, profitable in 2021
To Top
error: Content is protected !!
Top